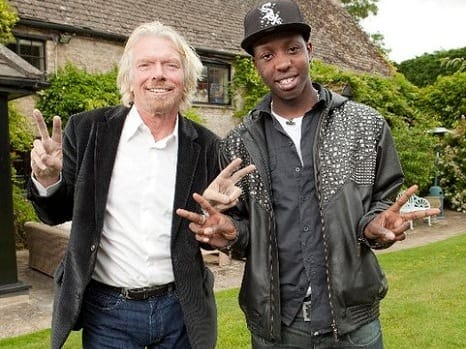 He’s 22. Worth £6m. And pals with Branson. Meet Jamal Edwards

“Being on the Sunday Times Young RichList with £6m means nothing to me,” says SBTV founder Jamal Edwards, “It’s a fragment of what I can achieve.”

Edwards is richer than pop icons Jessie J and Taio Cruz and still owns a 100% of his online broadcasting company SBTV (named after his rapping name Smokey Barz). SBTV is a very modern broadcaster based only on YouTube. It publishes interviews, live events and jam sessions of upcoming artists and music superstars like Justin Bieber, Ellie Goulding, Nicki Minaj and Bruno Mars.

Edwards’ story is cracking and frankly makes you wonder what you’re doing with your life. At 16, he was a Topshop store assistant uploading videos of a fox in his backyard on YouTube. Now at 22, he’s the CEO of a company that has 130 million YouTube hits and 215,000 channel subscribers.

He’s tipped as the Simon Cowell of grime music, and has signed a deal with Sony’s RCA to launch his own record label, Just Jam. He’s friends with Sir Richard Branson and has interviewed David Cameron and Ed Miliband for SBTV.

Last year, he featured on a Google Chrome advertisement that was aired during last year’s X Factor’s first episode. The ad made the SBTV website crash and was the second-most popular UK YouTube video ad in 2011.

“I’ve built a business from nothing. Yeah man, I’m a media mogul”

I meet Edwards at the SBTV headquarters in Ladbroke Grove. Dressed in tattered jeans, a scruffy hoodie, orange Puma sneakers and skull-shaped rings in his fingers, he doesn’t look like the CEO of a multimillion pound company from any angle. Yet, his Louis Vuitton belt and the Blackberry and iPhone in his hands show that the kid is rich.

“People say, ‘Oh Jamal Edwards, I saw him the other day, looking like a tramp,’ I don’t care, that’s who I am. I don’t need to suit up to convince people of the power of what I’ve made,” he tells me in his Hip-Hop rapper-like accent.

“I’ve built a business from nothing and I’ve given so many artists a break. Yeah man, I’m a media mogul.”

Edwards’ earns his money from advertising and sponsorship around his videos and through an online SBTV merchandise store.

Ask him to name a few clients and he reads out a long list form his Blackberry which includes Reebok, Nandos, Puma, Adidas, Nike, New Era, Sony, Universal and Wrigleys amongst others.

“The more hits you get the more cher-ching in advertisers’ eyes.

“We’ve got the creative ideas, the platform and the reach and that’s why the brands come to us. We’ve got quite a few happy clients who come back to us with bigger budgets on the back of successful campaigns, it’s amazing.”

Jamal Edwards: “I want to be like Branson – make a big empire, and leave a legacy.”

But then again, he’s only 22. How does he get brands to take him seriously?

“It was difficult to convince people with big budgets in the beginning but now I have employed people from professional backgrounds who come into meetings. They have 10-15 years of experience and they can handle big budgets.”

He insists that the big brand partnerships and obsession with monetisation haven’t taken over his mission to promote his first love of grime music. “I upload grime or rap every single week without fail. I want to prove that urban music isn’t about some black kid rapping and spitting on the streets, it’s a culture.”

“I want SBTV to find the next Alexander McQueen, Russell Brand and David Beckham”

In a business which works on the “survival of the coolest” principle, Edwards faces a ton of competition from other YouTube channels, not to mention the traditional networks such as MTV and VH1.

But Edwards’ got his blinkers on. “I’m here to chase my dreams, not competition. I’m here to do my thing man, I don’t look at anyone else.

“To those, who copy SBTV, I say, ‘Imitation is the sincerest form of flattery.’ I’ve got 130 million views, I think that says a lot.”

“But why would people watch SBTV instead of MTV?” I ask.

“SBTV’s connection with the youth and big stars in what keeps people hooked to the channel. And I’m buzzing with creative ideas to be on the top of my game,” he says confidently.

He then looks me in the eye and says, “The revolution will not be televised, if it’s televised, it’ll be digitalised first.”

I probe him to explain what he means by that but he does the ‘zip my lip’ mime. “Let the LondonlovesBusiness.com readers make what they want to out of that,” he chuckles.

I presume he means that the internet is the future and that online entertainment would take over TV.

Next question for him is has he ever considered selling the business? Edwards knows he’s “hot property” for investors but he’s not ready to let go of his baby yet.

“I can’t live with the fact that I do all the hard work yet I don’t own what I create. I’m getting by fine and am focused on making SBTV bigger.”

“Even if someone offered me £20m, I wouldn’t sell the business. Imagine if Richard Branson sold off his business, he’s wouldn’t be Richard Branson. I want to do something like that – make a big empire, and leave a legacy.”

“Even if someone offered me £20m, I wouldn’t sell the business”

Moving on, Edwards tells me these are busy times for SBTV as he’s trying to up his game by branching out to SBTV comedy, SBTV fashion, SBTV sports, SBTV business, SBTV Games & Gadgets and SBTV culture. Expanding to New York is also on the cards.

“I’m going to start with launching SBTV Fashion by January 2013, it’s going to be explosive.”

When he’s not filming videos, Edwards likes to do his bit for young Londoners. He’s a Spirit of London Ambassador and is hell bent on getting London’s young population to start voting.

“I think young people look at politics and say ‘Nah! Forget that it’s boring’. But it’s so important. The reason why we don’t get heard is because we’re not voting. Take the over 65s for example – they get special privileges like discount on tube fares because they’re voting.”

His message to the youth: “To all those who are struggling to get jobs, I say have self-belief, don’t let anyone tell you can’t do something. I’ve managed to make something out of life when I wasn’t the best kid in school, why can’t you?

“Believe you can achieve.” Will this attitude help him climb his way up the Sunday Times Rich List? Hell yeah!