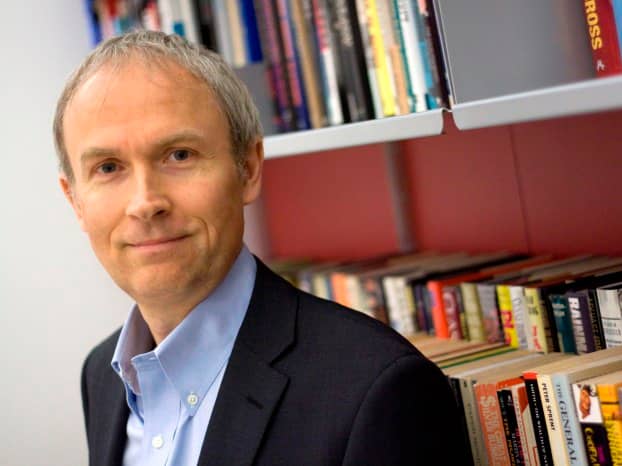 We meet the ever-outspoken former Channel 4 chairman, investor and restaurateur

Luke Johnson is known for coming out with salacious soundbites. He famously decried Google as “monstrous” and seems to relish now telling me it’s a “parasite”.

He also thinks the dominance of Apple, Amazon and co is “unhealthy”, because these tech giants are “very good at not paying much in the way of tax locally, and actually they don’t employ that many people locally either, relatively speaking”.

Well, you can say that again – news broke on Wednesday that Google paid just £6m in UK tax on UK revenue of almost £4bn.

What else? “When [Brits] go on holiday they contribute to the trade deficit,” says the former Channel 4 chairman, investor and entrepreneur. “If the French holidayed abroad as much as us they’d have a huge trade deficit, much bigger than ours.”

He is defending the hospitality industry, which he feels people “totally underappreciate”. (He was and is prolifically involved with restaurants and food, having built Pizza Express’ share price from 40p to 900p in six years, and founding then selling Strada for £60m.)

VAT on hospitality and leisure needs to be cut, he says.

As for the Office of Fair Trading, “as it happens, I don’t think that’s a well-run organisation – I’m glad the man that was running that is leaving.”

Harsh? Maybe. But Johnson, in his early 50s and dressed in a purple polo shirt and brown khakis that crumple over his slight frame, is not the type of entrepreneur who feels it necessary to radiate sunbeams of unerring enthusiasm and joy in a bid to enchant everyone else. He’s notoriously a rather unnerving character, not only because of his commercial prowess but because he can come across as distinctly frosty. When I suggest there is a snobbishness among university-leavers about working in entry-level hospitality and leisure jobs, he retorts: “Should they be journalists on online websites?” At other points he’s warmer, but never quite reaches the point of full-throttle friendliness.

The roll-call of his past business achievements is far too long for one paragraph: as well as restaurants and media, he founded Dental Holdings, which he sold for £100m within 10 years; is non-exec director of Metro Bank; and has/had a vast swath of stakes in businesses as diverse as greyhound racing (GRA) and Topps Tiles.

Food is his big thing though, along with media. As founder and chairman of private equity firm Risk Capital Partners, he is part-owner of Giraffe, Patisserie Valerie and a spread of other food-related companies.

He laments that the British attitude to the restaurant and hospitality sectors isn’t more like “in France, and to a degree Spain and Italy – they have a tradition of it being a long-term career and it’s taken rather more seriously”. He says it is getting better here, but still “ambitious, clever people miss that it’s a great way to run your own business. […] There’s always innovation, there’s always room for new players to come along.

“London is the quarter of all that inventiveness, where 95% of all the new ideas and the clever, fresh brands come from. The different cuisines, the original offerings, are independent. They’re not corporates or groups [which are] generally hopeless at coming up with the new ideas.”

“There’s a wall of money out there.” How do people get their hands on it then? “Have a compelling proposition.” Right.

His unwavering belief that “anyone with some fire in their belly and some nous can run their own business” would perhaps feel a tad more inspiring if delivered with more enthusiasm, but I actually quite like the fact he doesn’t over-egg recipes such as: “For those who want the independence and the freedom of doing their own thing, delaying it [because of the economic climate], waiting for the perfect situation, is not realistic. I think they should get stuck in, make it work, and move on if they pick the wrong opportunity.”

But does he really think the pace of growth he achieved with Strada and Pizza Express is achievable in today’s climate? “Why not?” Well, there’s no finance around for a start. “That’s rubbish. There’s a wall of money out there.” How do people get their hands on it then? “Have a compelling proposition.” Right.

“Venture capital is quite scarce, but Britain is awash with private equity. Admittedly your company’s got to be of a certain scale before you raise that kind of capital, but, like I say, it’s not easy and it never has been.”

Johnson actually does make it sound misleadingly easy, sounding blasé about how he grew Pizza Express from 12 to 250 branches in six years, and Strada from scratch to 30 units in the same length of time: “In the first year you open a few branches, next year five or six, then 10 then next year, then 12.

“You gradually recruit good people,” he explains, reeling off the list of key characters, “ideally promoting from within if possible so you’ve got talent who understand the business and are loyal.”

Johnson clearly has an innate grasp of business, but he studies hard too – no doubt a trait picked up from studying medicine at Oxford, where running club nights gave him the taste for entrepreneurialism. He’s got at least 200 of his business books lining the room we’re in, “and they’re only a fraction of my books. I’ve got several more bookshelves in the rest of the offices, and many, many, many more business books at home.”

“If you’re exiting, there’s an awful lot of private equity houses out there who will want to invest.”

When it comes to expansion, “You probably want, in my experience, to grow as fast as you reasonably can without falling over.” Warning signs of over-expansion are quality standards falling, and new outlets failing to perform. “You’ve got to have controls of cash and you’ve got to have proper reporting of the numbers,” he advises.

“There will always be moments of chaos […] but you need a sufficient critical mass in the centre that’s highly profitable and working well before you start, you know, going mad, opening up everywhere. Quite often people get excited and blow their brains out.”

As for the companies he invests in through Risk Capital Partners, we’re talking businesses turning over less than £50m, with £3m-£5m profit, and, of course, great growth prospects. He likes “complicated or messy circumstances” where there is some kind of problem to be unravelled, some potential to be unlocked using the contacts or expertise of him and his partners. “That helps secure the deal, if you like.

“If you’re just another provider of capital then you’re the same as everyone else, then you’re a commodity.” He would rather “add some value, help make a difference”.

Returns have been longer since recessions version one and two. But, as most in the space seem to agree, there’s large demand for good businesses. “If you’re exiting, there’s an awful lot of private equity houses out there who will want to invest. But they’re finding it very difficult to deploy money because an awful lot of companies have blotted their copy book in the sense that, you know, they’ve had hiccups [in growth].

“So I think it’ll take a year or two more of recovery for businesses that have suffered in the downturn to resume their progress.”

Short supply is also pushing prices up on the acquisition side. “We go into an auction to buy a business, and if it has highly-regarded management, and wonderfu
l track record growth and lots of great prospects, then prices are normally too rich for us.”

Floating rather than selling is not the option it once was for companies looking to exit. “When I was younger companies went public. Hardly anyone goes public now. The stock markets are moribund. And I think it’s a great shame. But it’s too expensive, it’s too highly regulated and restrictive, and there are alternative sources of capital.”

Does Johnson buy into the argument that it’s easier to float in the US? “They’re more regulated there. I’ve sat on the board of an American public company and, believe me, they report quarterly there – it’s a much more onerous regime than here. So that isn’t true. It’s a bigger economy and they’ve got more money, so of course it’s a more popular place for IPOs.”

There’s not much chance of Johnson moving Stateside though, despite the rather unexciting activity shortage here. “It was 38 degrees yesterday in New York. Is that what you want? 38 degrees and 95% humidity. That’s unspeakable.”

Besides, “London is arguably the greatest city on earth in terms of places to visit. We don’t have the weather, but who cares about that? And this is alright. Obviously I want some sunshine but we’re here for culture [he was appointed chairman of the RSA in 2008 and invests in theatre], for museums, theatre, music, restaurants, celebrities, history, galleries.”

Well, that’s something to be cheery about.