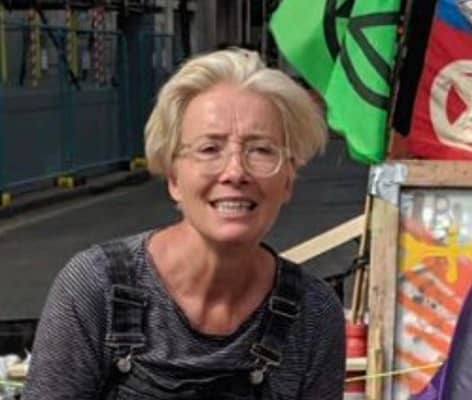 Dame Emma Thompson has joined climate change activists on Friday morning, she climbed on board the pink boat at Oxford Circus and addressed the crowds.

To cheers of support from activists the Hollywood actress said, “We are here in this little island of sanity and it makes me so happy to be able to join you all and to add my voice to the young people here who have inspired a whole new movement.

Oxford Circus all the buzz — thought I would upload the video of the letter being read out. "Day of Love" declared at protest. #XRP #Oxfordcircus #EmmaThompson pic.twitter.com/HnUwvdpTii

“We have seriously failed them, and our planet is in serious trouble, we have much, much less time than we thought.

“I have seen the evidence for myself and I really care about my children and grandchildren enough to want to be here today to stand with the next generation.

“If you can’t have fun whilst saving the planet, what’s the point?

“Protest should always have a sense of joy in it because what we are protesting about is saving this extraordinary home of ours and also celebrating the passion and inspiring energy of this young generation.

“These are young people who have finally said to my generation ‘I’m so sorry but you have failed us’.

“We all feel dreadful about that. My feeling is I feel massively inspired by this young generation and want to stand next to them.”

The Love Actually star said climate change is “the most pressing and urgent problem of our time, in the history of the human race.”

After Dame Emma’s speech police surrounded the pink boat and told bystanders there was an ordinance to clear Oxford Circus.

The Met Police said, “The protesters are using tactics of lying on the ground when approached. This means that it takes at least four officers to remove one person to ensure their safety which is resource intensive.”

Marsh added, “The sufferers will be the communities in the local boroughs where officers are being taken from the community areas and the funding and money has to be found to deal with what we are doing.”

Extinction Rebellion has pledge they will continue to cause major disruption across the capital until their demands are met, as they want the government to declare a climate emergency. They are also wanting the government to reduce greenhouse gas emissions to net zero by 2025.

Financial and business professionals to unite in fight against climate...

London Football Club hits the back of the net with...

Sadiq Khan and Hillary Clinton urge cities and businesses to...