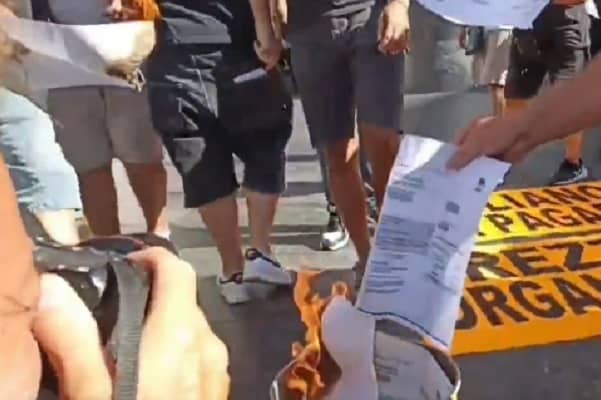 Naples has been rocked by civil unrest which could grow as protesters have taken to the streets to burn their exorbitant energy bills.

The people in Italy as well as all over Europe are now being hit with rocketing energy bills to which they cannot pay and footage shows protesters shouting “we don’t want [enormous bills] anymore.”

Italy has been hit with historic high energy bills following Russia reducing the flow of gas and then on Sunday Gazprom indefinitely turned of the flow of natural gas to Europe.

Italy’s Deputy Economy Minister Laura Castelli said, “Action must be taken in the next few days.”

Speaking to the Italian newspaper Corriere Della Sera, she said: “There is scope for a new decree to calm the effects of the price of gas”.

“An upper limit must be quickly fixed on the price of gas,” hinting at the possibility of a freeze on the energy price cap as part of the measures the Italian government is urged to put in place to tackle the current crisis.”

Since Russia invaded Ukraine food, energy, fuel and many other items have all soared in prices making daily life unaffordable for millions across Europe.

Risk consultancy firm Verisk Maplecroft warned on Friday that even the wealthiest countries in Europe are struggling to make ends meet over the soaring cost of living.

People in Naples burn their energy bills and besiege the town hall: "We don't pay the bills! Now it will be chaos!" In Naples they don't joke. pic.twitter.com/X2ZN82AfAT

Experts at the firm have warned that Europe could “start to see more serious forms of civil unrest” and Germany and Norway who are developed economies are already seeing daily disruptions.

The Verisk report warned that the “most explosive civil unrest” will likely occur in places where “the ability to shield populations from the rise in living costs are limited.”

Verisk Maplecroft’s principal analyst Torbjorn Soltvedt said: “Over the winter, it wouldn’t come as a surprise if some of the developed nations in Europe start to see more serious forms of civil unrest.”

Russian state owned Gazprom stopped the flow of gas to all European countries because Europe introduced a price cap on Russian supplies, which will affect millions of households.

The former Russian President Dmitry Medvedev warned the European Union on Friday that Moscow will stop the flow of natural gas to Europe if they introduce a price cap on Russian supplies.

Medvedev said in response that “there will simply be no Russian gas in Europe.” Europe and the US have openly accused Moscow of using gas as a “weapon against consumers.”

The European Council President Charles Michel stressed, the “use of gas as a weapon will not change the resolve of the EU.”

As energy bills are set to soar this winter, UK consumers are prioritising finding …