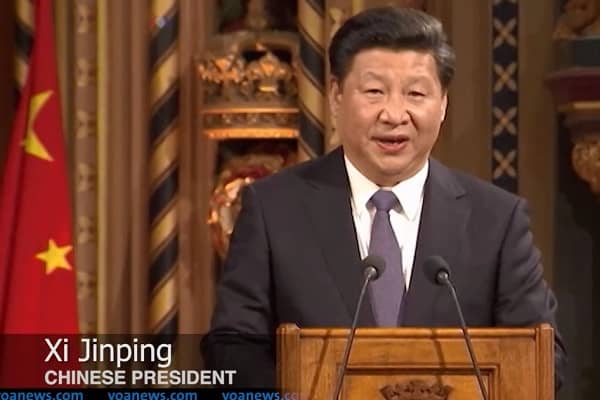 The US Secretary of State Mike Pompeo is in Downing Street for a summit meeting and met with Prime Minister Boris Johnson and Dominic Raab.

Pompeo slammed the Chinese President Xi Jingping and called him “disgraceful” for “exploiting” the coronavirus pandemic for their own interests.

Speaking after the meeting he told journalists at Downing Street, Pompeo did not hold back on his words, and warned that Jingping’s Chinese Communist Party (CCP) pose a serious “communist threat.”

The US Secretary of State has urged other nations to push back against the CCP and said the Chinese leadership is a threat, and said democratic nations must understand the threat they pose, he warned on Tuesday afternoon.

Pompeo said speaking from No 10 Downing Street, “We began with the challenge presented by the Chinese communist party in the COVID-19 virus which orginated in Wuhan, China.

“On behalf of the American people I want to extend my condolences to the British people for your losses from this preventable pandemic.

“This CPC exploitation of this disaster to further its own interests has been disgraceful and rather than helping the world, General Secretary Xi has shown the world the party is true face.”

The Prime Minister and Pompeo discussed the U-turn over Chinese tech giant Huawei and their involvement in the 5G network across the UK.

Pompeo welcomed the news over Huawei and also the suspension of the extradition treaty with Hong Kong, amid the new Chinese security laws.

A Chinese embassy spokesman to the UK, warned on Tuesday that the UK will “bear the consequences if it insists on going down the wrong road.”

He added, “Now the UK side has gone even further down the wrong road in disregard of China’s solemn position and repeated representations.

“It once again contravened international law and the basic norms governing international relations and blatantly interfered in China’s internal affairs in an attempt to disrupt the implementation of the National Security Law for Hong Kong SAR and undermine the city’s prosperity and stability.

“China urges the UK side to immediately stop interfering in Hong Kong affairs, which are China’s internal affairs, in any form.

“The UK will bear the consequences if it insists on going down the wrong road.”

Tobias Ellwood, Chair of the Defence Select Committee has warned that the UK and China have already entered into Cold War II.

Ellwood said the British government are “in denial” over Cold War II and said the UK must adopt a “full foreign policy strategic reset” towards China.

Ellwood said that the Foreign Secretary’s decision to remove the extradition treaty with Hong Kong was “well overdue,” and claimed that the UK has “turned a blind eye to China’s human rights record” for decades.

Speaking to Sky News the Chair of the Defence Select Committee said, “It’s a change of attitude I think we’re seeing from the foreign secretary and from this government, and I think well overdue.

“So, I’m glad to see a more robust line. Because for decades I think we’ve turned a blind eye to China’s human rights record, its democratic deficit, in the hope that China would embrace Western-style norms and standards.

Beijing officials believe ‘Putin is insane’ Moscow ‘will fail in...