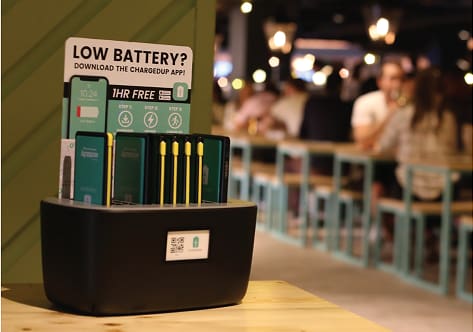 Ever been out exploring the city and your phone’s battery died at the worst time?

Well, the solution is finally here.

London-based company, ChargedUp is taking the bike sharing model and bringing it to mobile phone charging.

ChargedUp has developed a network of vending stations where, for a small fee, users can borrow portable battery banks, use them for as long as they need and then return them to a station of their choosing.

You can locate a station using the ChargedUp app and then simply scan the QR code to release a battery. Each battery can charge a phone twice over and comes with connector cables for both iPhone and Android.

The entire ChargedUp network runs on 100% green energy, made possible by a partnership with Ecotricity.

ChargedUp aims to be the go to solution for Londoners who constantly find themselves low on battery.

Founder and CEO Hugo Tilmouth comments; “Battery life has not managed to keep up with the demands we put on our Smartphones, and running low part-way through the day is now a common, and very frustrating, occurrence. It was certainly driving us mad! Which is why we developed ChargedUp as an easy, cost-effective way to charge your phone on the go. From as little as 50p, you’ll always be fully charged.

“We also wanted to ensure that we had protecting the environment at the heart of the business, which is why all the batteries are charged using green energy from Ecotricity, whilst also utilising the sharing economy to reduce lithium battery consumption”

ChargedUp’s innovative battery rental stations are launching across nearly 30 locations in London this month and aims to be in over 1000 venues in London by the end of 2018 and will expand beyond the capital in early 2019. You’ll find them in bars, cafes and restaurants but also in office shared working spaces. Pick up from one station – drop off at another. There is no need to waste time waiting for your battery to charge – you can keep moving and get on with your day.