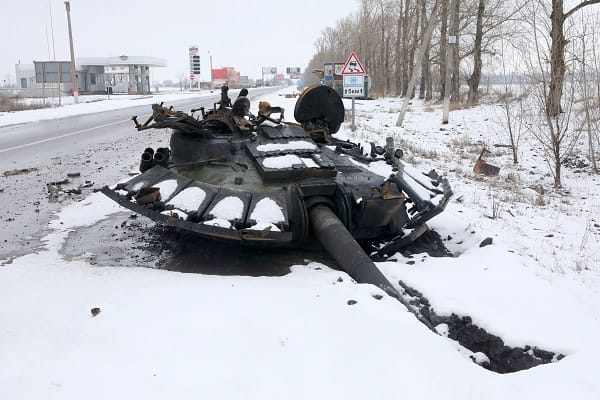 A captured Russian officer has warned that Vladimir Putin is sending troops “to their deaths” and the Ukrainian forces “just threw us.”

The captive Russian officer, lieutenant of Russian tank troops Maxim Grishenkov said at a press conference at Interfax-Ukraine on Saturday, that the Ukrainian servicemen are putting up great resistance and are “fighting like beasts.”

The captured Russian officer said, “We were heading towards Sumy. The next task was to reach Kyiv as quickly as possible.

“The task was to smash everything that we see from military equipment or military people who are not related to our troops.

“But our column was ambushed and was completely defeated by the locals, who they fight like beasts with all weapons.

“They do not give up a single centimeter of their land. The command just threw us. There was no support.”

Another Russian captured officer Dmitry Koloyartsev, said that Ukraine has modern weapons and they “were bombed from everywhere – from the air and from the ground.”

“After we passed Sumy and Pryluky, my convoy came under fire from Ukrainian forces. The entire convoy burned down.

“You have modern weapons. We were bombed from everywhere – from the air and from the ground.

“Bayraktars, RPGs, machine guns. It was scary. I volunteered with my crew surrendered,” he said.

“We faced quite a lot of resistance.

“I have never seen anything like this. I want to ask that no one be sent here and that the troops simply withdraw from here,” he said.

“Russian conscripts, your children, are dying here. My comrades are dying. They are simply dying because they are being deceived. Putin is deceiving them, sending them to their deaths. a missing person’s notice, but that is a lie.

“Our young boys stay here because our president does not want us to tell our country what is happening here. Russia does not take the bodies of our dead,” Gagarin said.