Home Breaking News Around ‘15,000 Russia troops’ could ‘essentially be forced to surrender’ which will ‘be a strategic defeat for Russians in the south’ 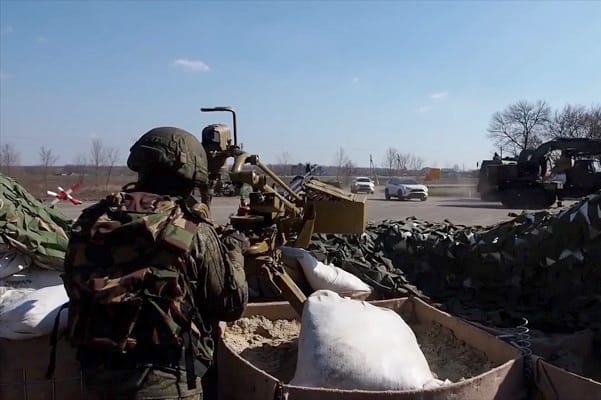 Russian forces are unable to hold the occupied territory in eastern and southern areas of Ukraine and “approximately 15,000 Russian troops” could “essentially be forced to surrender.”

Ukrainian troops are making significant gains in their counteroffensive and Russia troops have retreated in both the north and eastern fronts.

Ukraine has now retaken an enormous amount of their land back in the east of the Oskil River in the Kharkiv region and Russian troops are now left with virtually no options.

Vladimir Putin is facing a “strategic defeat” for the Russians in the south which will open the way for Ukraine to then focus on recapturing Crimea.

If the Ukrainian forces continue with their pace then they could retake Crimea quite soon US military officials have said.

US official told The Telegraph: “It is clear that Russia no longer has the ability or willpower to defend key positions, and if the Ukrainians succeed in their goal of recapturing Kherson, then there is a very real possibility that it will ultimately be able to recapture Crimea.”

Royal United Services Institute Research Fellow Ed Arnold told Sky News, “At the moment, it looks like approximately 15,000 Russian troops could in a couple of scenarios essentially be forced to surrender, which would be a strategic defeat for the Russians in the south.”

Breaking through the line pic.twitter.com/oIBtlXz6QK

He added that the “quick” rate at which Ukrainian troops are progressing in the east and north, which gives the Russians  with very few options left.

He said, “They could either move to Kherson in the southwest and try to get the protection of the city.”

Arnold said that these “are not really good options.”

#UAarmy’s autumn offensive, day by day. While the "russian parliament" is intoxicated from the futile attempts at annexation, our soldiers continue moving forward.
This is the best answer to any and all "referenda", "decrees", "treaties" and pathetic speeches. pic.twitter.com/qLCBu0Vdns

“There’s already been eight towns liberated in the last 24 to 48 hours, the rate is very quick. And the rate of withdrawal from the Russian side is also incredibly quick.

“And when units have to withdraw under those circumstances, you need very good commanders to rally the forces.”

The UK’s Defence Intelligence reported on Thursday, “Politically, Russian leaders will highly likely be concerned that the leading Ukrainian units are now approaching the borders of Luhansk Oblast, which Russia claimed  to have formally annexed last Friday.”