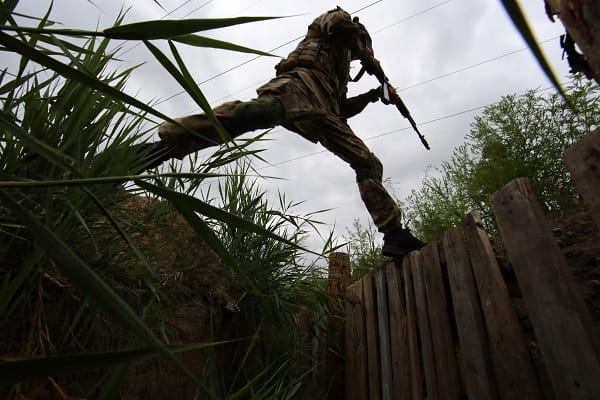 Ukrainian armed forces are continuing to punch their way through to regain their territory and are now close to the Russian border.

President Volodymyr Zelensky’s troops are meeting more of their “military objectives” and in 48 hours they have liberated dozens of towns.

Ukraine has met their “primary political objective” and the troops are “showing the West that it can take back territory – and using the weapons systems provided to do that.”

“First, to liberate towns and cities, as many as possible, before winter sets in.

“But also to make sure that all the Russian-held territory is in range of  the longer-range weapons systems, so they can further degrade the Russians.”

He said the Ukrainians have liberated eight towns around Kherson in the south in the last “24 to 48 hours.

“Effectively, the Russian front has started to collapse.

“When armies collapse like this they need very good commanders to rally the troops, which the Russians just don’t have at the moment.”

He added there are now “no natural defensive positions” around the Russian army in eastern Ukraine and are being pushed back over the border into Russia.

Alexander Kots, who works for the Russian pro-government tabloid Komsomolskaya Pravda said in a video posted to Telegram, “The Russian troops do not have enough manpower to stop the enemy attacks.

“The recent Russian losses are directly connected to that. It’s a very difficult period of time on the front line at the moment.

“The enemy is concentrating its forces to attack Svatove from two directions.

“The enemy artillery is reaching and working over the Kreminna-Svatove road and its sabotage and reconnaissance groups can operate there.

“This area is being fortified by the Russian troops who dig trenches and place land mines.”

Kots added, Ukrainian forces are “on the high and enjoying a numeric advantage.”

“They don’t have problems with the intelligence data or high precision weapons which they are constantly using.

“We are just waiting for our reserves to become fighting fit and join the battle.”