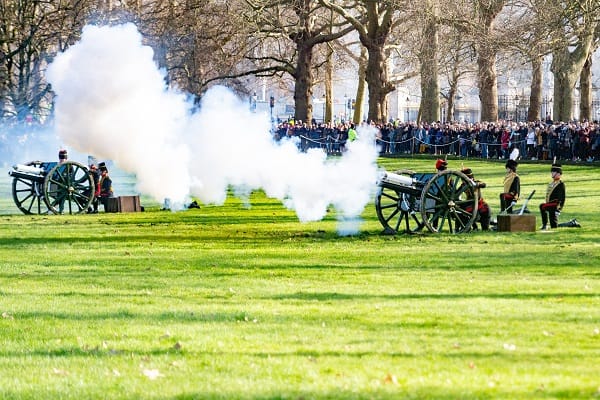 The Queen’s Platinum Jubilee has started today with a 41 gun salute at London’s Green Park marking her historic 70 years on the throne.

Lieutenant Colonel James Shaw, who as Brigade Major of the prestigious Household Division oversees the Army’s big ceremonial events, said, “For me this is the launch of the Platinum Jubilee, this is where it all starts for all of us and as a country.”

Monday was his first day in his role as Brigade Major, and he faces a busy 2022, he said, “This is no doubt a career highlight for me, I’m honoured to be involved.”

He added, “On June 2 we’ve got the Queen’s Birthday Parade, with 1,400 troops involved in that, and on June 5 there’s the pageant and the armed forces will also be involved.

“I’m going to be heavily involved in the planning for both events, so really exciting.”

This year events will be held to honour the Queen who pledged in 1947 to the Commonwealth and the UK “that my life will always be devoted to your service.”

Lt Col Shaw, who was wearing his Platinum Jubilee medal ribbon, said, “There’s a huge amount of pride in being able to wear it and it demonstrates that strong bond between the sovereign and the armed forces.

“It’s a huge honour and signifies a massive moment for all us and the country.”