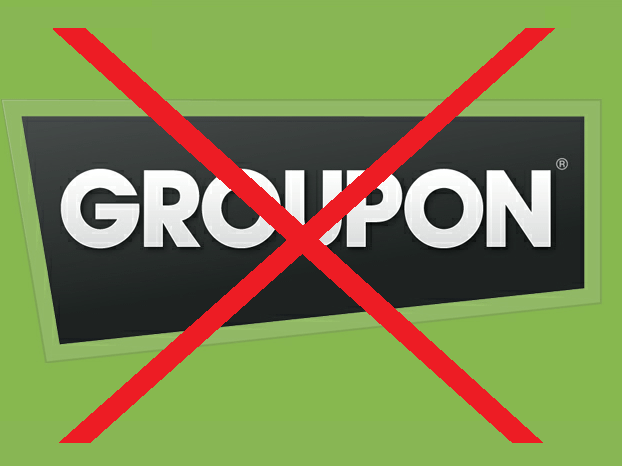 Why Groupon should never be the focus of your marketing strategy

Thousands of businesses have run deals through Groupon to attract new custom. So why is serial tech entrepreneur Pete Boswell warning you against it?

It’s been a torrid few weeks for the group-buying website Groupon. CEO Andrew Mason has told employees that the Chicago-based company doesn’t “have any margin for error”, as its share price slumps to around $10.5 from a high of $31 in November 2011 (just after its IPO).

Groupon seems to be somewhat out of control, dragged down by an increased demand for refunds and increasingly complicated arrangements. The company’s accounting method was described as “both unusual and fragmentary” by financial analysts following its Q4 earnings being revised down from a $15m profit to a $15m loss – quite a surprising swing into the red.

These are worrying signs for a company once estimated to be worth in the range of $12 to $20bn. The danger doesn’t seem to have been lost on Mason, who recently told his staff that the business needs to “grow-up” as it was “still this toddler in a grown man’s body in many ways”.

It’s easy to knock a company on the ropes. My own businesses have been there many times. In fact, my concerns about Groupon are not about ‘Groupon the business’, but whether using Groupon as a part of your small business marketing strategy is sustainable.

My fear for small businesses is that sites like Groupon prey on vendors’ insecurities, attracting those who are unable to market their products and services effectively.

While insiders may argue that Groupon has tapped into a new market, the reality is that the model of ultra-discounted deals appeals to businesses that are transfixed with old-fashioned traditional media. Groupon at its most basic level is no different to an old-fashioned newspaper advertising campaign.

Therein lays the danger. I suspect that too many small businesses see this marketing option as a panacea. Small businesses flock to the site because they are seeking the widest possible distribution for their campaign.

They think listing a deal on Groupon will drive traffic to their products – that customers will browse and buy beyond the ‘Groupon deal’ – and even potentially build some form of customer loyalty and future repeat buyers.

It sounds simple and straightforward enough. The short-term benefit appears to be brand extension and the hope of additional sales. But I believe the risks and sacrifices are far greater.

Groupon is attractive to consumers who are looking for massive discounts, often 50-70% off, with Groupon taking a chunk of the remaining price. This leaves very little – if any – margin for the business owner offering the deal.

If you don’t already have a margin built into your product, you run the risk of being in the red on every sale you make. And even for those who have the luxury of being able to give up, say, 75% of their revenue and yet still make a profit, it’s going to be a tiny one, meaning you have no option but to sell in volume.

You also run the risk of alienating your existing loyal customer base. Groupon may help win a few new clients, but they, at least at first, are never going to be as loyal as your current customers.

Why then would you risk a regular customer seeing that you can afford to give away a 50% – 60% discount?

The deals offered on Groupon aren’t usually end of line or Christmas sales, they are goods and services struggling to find new markets. And savvy buyers know the difference.

If you are anything like me, you’d feel you’d been ripped off in the past if you saw something you had bought suddenly being offered at half the price. Even if it was a product and brand I was engaged with, in future I’d simply have the tendency to sit tight and wait for the next 60% off deal just around the corner.

For small businesses like these, Groupon can appear attractive – maybe too attractive. Could you say these business owners were lazy? Far from it, most work their socks off. Groupon is simply, for them, the easiest way they can think of to market their business or product with the limited marketing vision, budget and resources at their disposal.

Will Groupon work for your business? It may, but I’m largely sceptical. You could end up gaining loyal customers off the back of a promotion, but that doesn’t necessarily mean the campaign will be a success, or even be worth the risk.

You need to ask yourself some critical questions, the most important of which is: do you have the infrastructure to handle the potential volume of purchases you hope for and then resources to convert those into repeat and loyal customers?

For all of Groupon’s might and distribution reach ultimately it will be up to you as the service provider to ensure that you offer a strong service or product and user experience which makes customers return. You may think that it’s easy to retain this huge influx of new customers, but Groupon’s own write-downs due to the increasing volume of refunds suggests that even the first hurdle of gaining the customer can be complicated.

For a ‘traditional’ small business, being in the online sphere should not be a case of compromise. Consider all the risks. A Groupon promotion can truly hurt and erode your brand differentiation, ultimately sacrificing customer relationship for a low cost commodity approach. You must be prepared to accept this fact and the consequences.

Can Groupon work for some? Of course. Would I ever consider Groupon it as a central part of my marketing strategy? Never.

Pete Boswell is a serial technology entrepreneur who has designed and delivered a number of award-winning software applications including PowerPressed and BluBox. His latest venture is Photo Legacy, a rapidly expanding digital photography service with global partners including Tesco and Jessops.