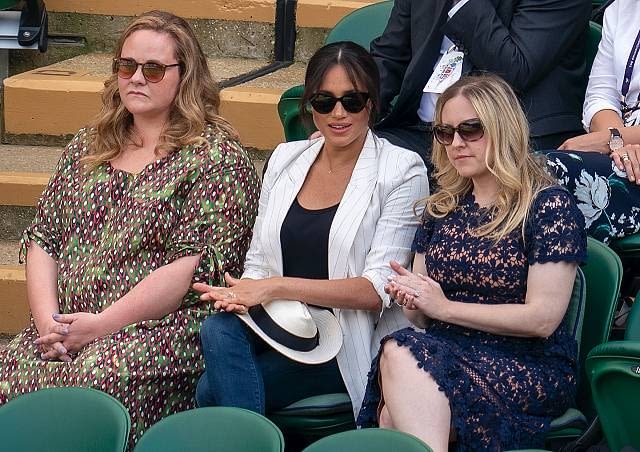 Good Morning Britain host Piers Morgan slammed Meghan Markle after it emerged that bizarrely a royal protection officer asked people not to take photographs of her at Wimbledon.

Markle made a surprise visit to Wimbledon last week to support her friend Serena Williams.

Reports have emerged that people sitting close to Markle were asked not to take photographs as she is their “in a private capacity,” despite the match being beamed on live TV and many press photographers taking photos of the match,

Sally Jones a media consultant claims she was asked by a royal protection officers to abstain from taking photos, despite now even knowing she was present at the tennis match.

Jones told the Telegraph, “I told him it was bonkers and that even if I had been trying to snap the Duchess, I’d have got a blurry picture of her right ear.”

“Apart from anything else, there were hundreds of people clicking away. I said to him, ‘Have you thought about having a word with any of those television cameras?’

“He looked a little uncomfortable.”

Piers Morgan has a message for Meghan Markle following her recent appearance at Wimbledon 😅 #GMB@piersmorgan pic.twitter.com/ga0IxqaIQi

Morgan was visibly angered by this and accused the Markle of hyprocrisy.

He said, “A private capacity… in the Royal Box at Wimbledon. As the Duchess of Sussex.

“This is so ridiculous, this obsession that her and Harry have about privacy.

“It’s rankly hypocritical and they’re not private people, they’re the Duke and Duchess of Sussex. We get to pay for their mansion, we get to do all of this…”

It’s absurd for Ms Markle to demand privacy as she sits in the royal box on a publicly-funded jolly with her mates… https://t.co/vcaymV3dyt

Morgan added, “In the Royal Box at Wimbledon. With the world’s cameras beamed on their heads.

“It’s not a private place. If you want to be private don’t go to the Royal Box at Wimbledon.

“If you go to Wimbledon in your free tickets in the Royal Box, the best seats in the house for nothing, and you take your two bezzies… you’re public people.

“If you want to be private, go back to America and live privately.”

Anti-vaxxer Piers Corbyn arrested as he encouraged people to ‘burn...