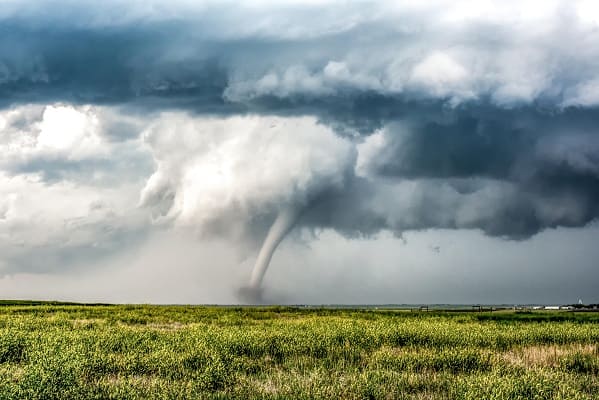 Storm Franklin is continuing almost a week of storms which is battering the UK with high winds and rain, now a potential Tornado warning has been issued.

The Met Office has issued several weather warnings for Sunday and Monday as winds are reaching speeds of up to 60mph and tomorrow Storm Franklin could bring winds of up to 80mph.

The winds will mainly hit Northern Ireland and parts of the UK and England could see tornadoes.

Forecasters with the Tornado and Storm Research Organisation (TORRO) has issued their own warnings as Storm Fanklin touches down in the UK.

TORRO described how the tornadoes could hit the UK and said they have identified a “sharpening upper trough” which is moving southeast along with a “surface cold front.”

TORRO said these conditions could create “instability” along with Storm Franklin’s front which would also bring rain and lightening strikes.

They confirmed what the Met Office said and the storm will make landfall with strong winds of up to 70mph and the “very strong low level shear” may well bring “weak” or “brief” tornadoes as soon as this afternoon.

TORRO said, “A sharpening upper trough will move ESE across the area today, with a surface cold front doing the same. Low-level convergence will increase along the front as it pushes through.

“A shallow wave should move across N England. The upper trough will help develop weak instability along the front, perhaps allowing occasional CG lightning, although instability is relatively shallow.

“One or more narrow rainbands should develop, and these will aid in the downward transfer of momentum. Strong flow in the near surface layer suggests that gusts of 50-60mph, locally 70mph will be possible.