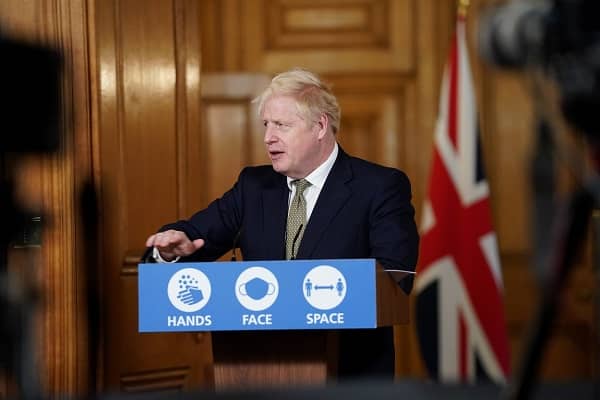 Sir Simon Stevens, the chief executive of NHS England warned on Tuesday that hospitals across the country are now seeing more Covid patients than the first wave.

As as result a Whitehall source has said that the government is to review the tiered system on Wednesday, and “Tier 5” lockdown could be needed.

NHS England data shows there has been a surge in patients across hospitals, with 20,436 beds are now occupied as of 28 December.

Last week there was 17,700 patients, and scientists are urging Boris Johnson to bring in even tougher measures to prevent the spread of the virus, and the new stronger vairant which is more transmissible in children.

According to the Daily Mail, The Scientific Advisory Group for Emergencies (SAGE) warned the Prime Minister that tougher measures than the current Tier 4 are needed.

A Whitehall source told the Express that the government could be set to add “another level onto Tier 4, so like a Tier 5.”

The source added, “We are ruling nothing out, the new strain is of serious concern. Tier 4 appears to not be strong enough.”

It is expected that the Prime Minister could be set to address the nation on Wednesday over the new tougher “Tier 5” measures.

Michael Gove MP told BBC Breakfast that they are refusing to rule out further tougher measures across England.

He said, “We review which Tiers parts of the country should be in on the basis of scientific evidence.”

Scientific experts are expecting the further restrictions which was seen last March, which saw schools close.

Gove added, “It is our intention to make sure we can get children back to school as early as possible.

“We are talking to teachers and headteachers in order to make sure we can deliver effectively. But we all know that there are trade-offs.

“As a country, we have decided, and I think this is the right thing to do that we prioritise children returning to school.”

Public Health England (PHE) have warned that schools are “most vulnerable” due to the new stronger strain of coronavirus.

Dr Yvonne Doyle, medical director at PHE warned, “This very high level of infection is of growing concern at a time when our hospitals are at their most vulnerable, with new admissions rising in many regions.

“Despite unprecedented levels of infection, there is hope on the horizon.”