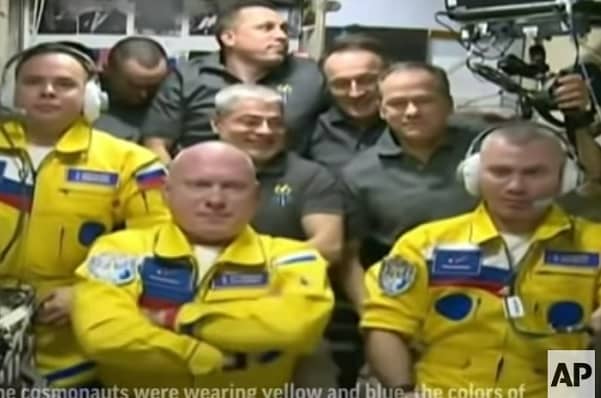 A video shows three Russian cosmonauts in the space station wearing the flight suits, however it is unclear what, if any, message the yellow uniforms were intended to send.

Oleg Artemyev was asked about the yellow flight suits, he said every crew chooses its own flight suits.

“It became our turn to pick a colour. But in fact, we had accumulated a lot of yellow material so we needed to use it.

“So that’s why we had to wear yellow,” he said.

Artemyev, Denis Matveyev and Sergey Korsakov blasted off from the Russia-leased Baikonur launch facility in Kazakhstan in their spacecraft on Friday.

On Friday Dmitry Rogozin, the head of Roscosmos sparked fears that there could be conflict onboard the ISS as he said his cosmonauts are “in a fighting mood.”

Rogozin tweeted in Russian, “The State Commission at Baikonur approved the main and backup crews of the Soyuz MS-21 manned spacecraft.

“The boys are in a fighting mood. Start tomorrow.”

Rogozin has sparked concerns that there could be some sort of conflict on board the ISS and he is known for his inflammatory remarks as he previously warned that the station could crash in the US which has an American astronaut on board.

NASA administrator Bill Nelson played down Rogozin’s comments, he told The Associated Press, “That’s just Dmitry Rogozin. He spouts off every now and then. But at the end of the day, he’s worked with us.

“The other people that work in the Russian civilian space programme, they’re professional.

“They don’t miss a beat with us, American astronauts and American mission control.

“Despite all of that, up in space, we can have a co-operation with our Russian friends, our colleagues.”