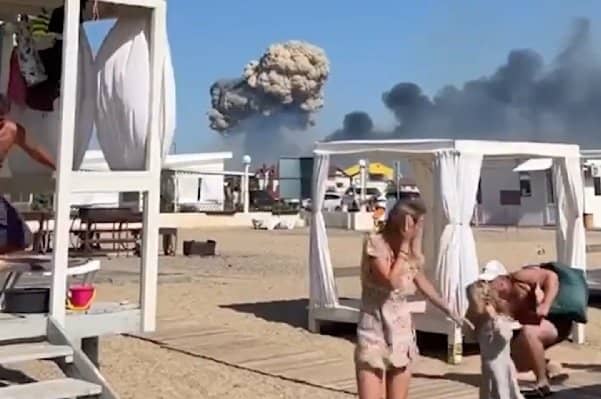 Russian holidaymakers in Crimea are fleeing as the annexed peninsula is coming under intense attacks with air bases and ammunition depots being blown up.

Over night multiple explosions hit another Russian air base in the city of Sevastopol which was heard by terrified locals.

Serhiy Bratchuk, the spokesman for Odesa region’s military, issued a warned Moscow, “These fireworks mean that Crimea is coming back to Ukraine.”

Speaking on Times Radio, Lieutenant Hodges added, “I noted with some interest and amusement that the tens of thousands of Russian vacationers sitting there in Crimea jammed that Kerch bridge trying to get the heck out of there.

“So, it’s clear that they realise they don’t belong there -they don’t seem willing to actually fight for it.

“None of them were seen heading for the nearest Russian army base saying ‘Hey, I want to help defend the motherland here.

“They were getting out of there as fast as they could.”

Following the day time attack on the Novofedorivka military base in Saki last week, record-breaking traffic was seen as the Russian were seen fleeing like “cockroaches and parasites” across the Kerch Bridge, heading back the Russian mainland.

Lieutenant Hodges added, “The Russians don’t have anything else with which they can escalate.

“The only other thing they can do is use a nuclear weapon.

One of our readers told LondonLovesBusiness in a comment, that “Ukraine isn’t attacking Crimea they are liberating it from Russian cockroaches and parasites.”

He added, “Get the Russian filth (occupiers) out of Crimea and back to their own stinking sewers.”

Tens of thousands of people have attempted to leave Crimea back to Russia and in one day, a record 38,000 cars were recorded fleeing.