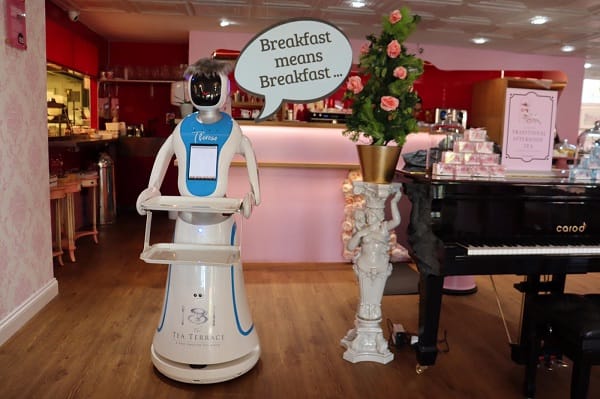 A British chain of restaurants and tea rooms based in London has become the first in the UK and Europe to introduce a robotic waitress to serve its customers, in what it says will be a pilot for the introduction of more robots in its work force in the future in the face of rising labour costs.

Ehab Shouly, Managing Director of The Tea Terrace, which owns and operates four restaurants and tea rooms in Cobham, Central London and Guildford, today announced the launch of Theresa the robotic waitress at The Tea Terrace’s newest branch on Oakdene Parade in Cobham, Surrey.

“We’ve christened the robot Theresa in a nod to the media’s nickname for former Prime Minister Theresa May. But our robot is far more intelligent than the vast majority of our British politicians, and she would easily juggle her job as a waitress at our restaurant and running the country,” Shouly joked.

Theresa comes with a double-tray which greatly reduces waiters’ repeat work such as food and drink delivery and carrying heavy trays of drinks such as teapots. “We don’t plan to replace our staff with robots entirely. But the idea is to help them and to make their job easier,” said Shouly, the founder and co-owner of The Tea Terrace.

He pointed out that the idea came from his wife, co-owner and fellow founder Rowena Shouly, who suggested that there must be an easier way for the staff to deliver the heavy one-litre teapots and teacups to the tables, after she noticed new staff having to make several trips to the tables to serve these.

“Rowena told me remember the robot we saw at that restaurant we visited in Tokyo a few years ago. Why don’t we get one of those. And immediately I thought that it would be a brilliant idea for the UK where costs for restaurants are spiralling out of control due to onerous business rates and taxes,” he said.

Staff at The Tea Terrace in Cobham, which opened last December, don’t have to do any of the heavy lifting any more because Theresa will take the food and drinks to the tables and then the waiters and waitresses simply take it from Theresa and serve it to the customer. The robot then asks the customers to tap its arm so that it can go back to its base.

“If Theresa senses a person in its route, it will stop and then frown and ask the person to move out of its way before she continues on her way. This is part of the safety mechanism we developed for her with the robotics laboratory that manufactured Theresa for us in Japan,” Shouly said, adding that Theresa uses laser-guided trackless navigation and ultra-sonic obstacle avoidance.

The robot’s face comes with LED Dot Matrix which allows it to show diverse facial expressions by flashing its eyes and either smiling or frowning.

Shouly said, “When someone is in its way, her eyes narrow and she frowns and asks them to move out of the way. When she is singing happy birthday, she is smiling and her eyes are happy.”

Theresa the robot runs 365 days a year and its battery requires charging over-night every other day. “This is one staff member who we know will never call in sick, will never complain, never request a holiday, and always show up to work on time. It really is the ideal employee,” Shouly said.

Asked whether his staff were worried about the introduction of the GBP 18,000 robot and concerned that Theresa and other new robots will take over their jobs, Shouly said there were some concerns expressed as jokes by the waiting staff at The Tea Terrace in Cobham.

“They were joking about losing their jobs to robots, but we reassured them that all robots who join the team are there to assist and not replace the staff. The human interaction and customer service has been key to our success since we launched The Tea Terrace 10 years ago. This will never change,” he stressed.

Theresa has been a hit with customers who are surprised to see a robot working as a waiter. “It’s a great conversation starter, especially that we put a Theresa May wig on her for fun. And we programmed her to say “Breakfast Means Breakfast” to poke fun at the former Prime Minister’s repeated Brexit Means Brexit statement,” Shouly said.