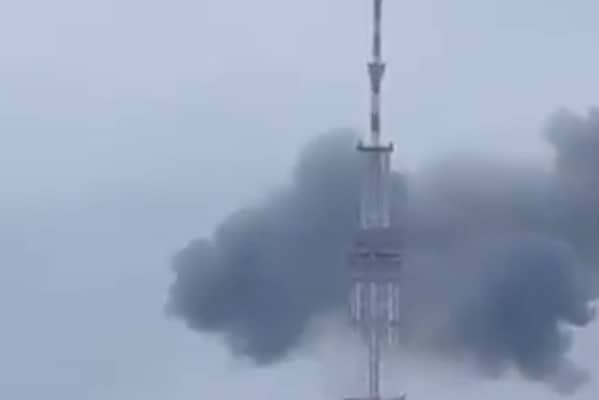 Russian forces have attacked the the Ukraine’s capital, Kyiv’s TV tower cutting all broadcasts with footage showing smoke rising from antenna, the Interior Ministry has said.

The adviser to Minister of Internal Affairs of Ukraine Anton Gerashchenko has said that enemy troops attacked Kyiv TV tower.

“Putin’s Nazis have just struck at the Kyiv TV tower,” Gerashchenko wrote on his Telegram channel.

Russian forces were accused of trying to disrupt its communication signal by advisor Anton Herashchenko, following the strike on Tuesday.

The strikes an attempt to prevent “information attacks” on Russia, the Ministry warned, as they urged those near the bomb site to leave the area.

The Kremlin has ordered all Ukrainians to leave Kyiv immediately earlier this afternoon as the capital is virtually surrounded and the grim warning means Russian forces are about to wage a full scale attack.

The BBC said they had received a “pretty ominous warning” from the Russian Defence Ministry, the warned that they are “about to hit targets in the Ukraine capital Kyiv.”

Via the news agency Interfax the Russian Ministry said, “In order to thwart informational attacks against Russia, [Russian forces] will strike technological objects of the SBU and the 72nd Main PSO Center in Kiev.

“We urge Ukrainian citizens who are being used by nationalists in provocations against Russia, as well as Kiev residents living near relay stations, to leave their homes.”