Home Business NewsBusinessAutomotive News Fancy free fuel? Cuvva is giving £1,000s worth of free fuel away to help drivers save this summer 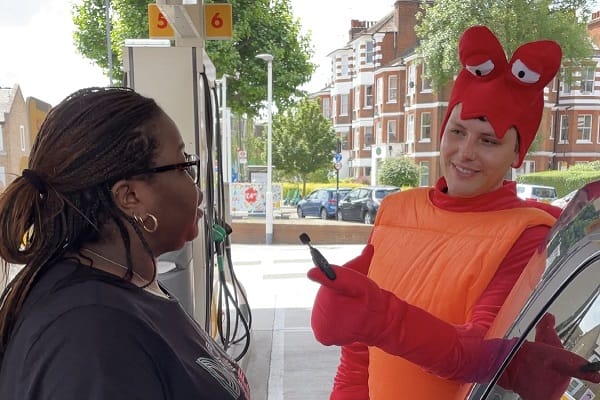 Fancy free fuel? Cuvva is giving £1,000s worth of free fuel away to help drivers save this summer

Last month, leading flexible car insurance provider, Cuvva went viral on TikTok with a video of a giant, red lobster giving away free fuel to drivers at a petrol station in West London. The video amassed nearly a quarter of a million views.

The car insurance app has given us the inside scoop that they’re heading out again, and are planning to fill up people’s tanks to the brim for free this Saturday morning, 20th August.

This time, Cuvva can be spotted in North West London at the Shell Service Station, High Road, Kilburn if you want to score yourself a free tank of fuel on Cuvva.

As household bills soar and rising inflation looms over the UK, owning and operating a car is becoming increasingly difficult for Brits.

Cuvva is on a mission to help drivers save, and as part of its #LetUsCuvvaThatForYou campaign, a hard-to-miss giant Cuvva lobster has been popping up at petrol stations around the UK, filling up lucky drivers’ tanks with fuel for free.

Not around this weekend? No stress! Throughout summer, Cuvva plans to give away thousands of pounds worth of free fuel. Keep an eye on their social channels to find out where the Cuvva lobster will be heading next. You might spot him in your neighbourhood soon.

Darryl Bowman from Cuvva said, “Filling up your tank is painfully expensive at the moment. It makes running your car even more costly. Our insurance already gives people a more flexible and cost effective way to drive, but we wanted to do a little more. If you see the Cuvva lobster hanging around, it may just be your lucky day.”

Cuvva is proving to be a gamechanger for those wanting to beat the cost of living crisis by ditching their cars and choosing to borrow someone else’s car instead with temporary cover.