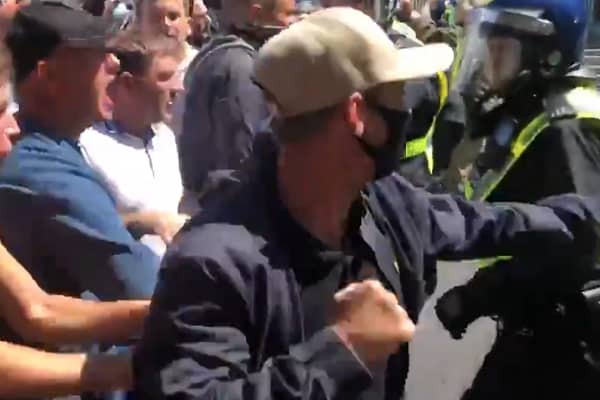 Violence has broken out in Whitehall, London this afternoon against the police with video’s emerging on social media shows officers being pelted with bottles.

Thousands of hooligans can be seen by Winston Churchill’s statue whilst hundreds of ex-military soldiers have surrounded the Cenotaph, with military orders being shouted to the group.

Hundreds of protestors chanting “Tommy Robinson” can be seen violently clashing with police hurling bottles and other objects at the thin blue line of police.

No one approves of this, but it is to be expected.

The football lads need to calm down, or are there provocateurs in the crowd?pic.twitter.com/4zkacTNzJh

Former members of the elite Parachute Regiment, the Irish Guards and other ex-military soldiers who undoubtedly would have seen action across the world serving our country, have now taken control of the Cenotaph.

Military veterans by The Cenotaph in London today. Do the media now class these people as ‘extreme far-right’?

The Democratic Football Lads Alliance (DFLA) are rallying “football lads, patriots, veterans and people who just love their country,” to protect statues and monuments in London.

Home Secretary Priti Patel wrote on Twitter, “We are in the grip of an unprecedented national health emergency.

“This severe public health risk forces me to continue to urge people not to attend protests this weekend.

“Gathering in large numbers at this exceptional time is illegal. Doing so puts everyone’s lives at risk.”

The clashes are thought to have broken out near Winston Churchill’s statue which has been boarded up.

The Met Police have implemented Section 60 for a large area of central London on Saturday morning, which provides them with greater powers to conduct stop-and-search over concerns some protesters have weapons.

A Met Police spokesperson said, “The safety of protesters, officers and the public this weekend is of the upmost importance, and it is for that exact reason why we have consulted with colleagues and partners, and decided it is proportionate to put in place a Section 60.

“It is our job to protect those who are coming into central London today, and this tactic is one of the best available to us, which allows us to seize offensive weapons that have absolutely no place on our streets at any time of the day.

“Whilst we believe there is no imminent threat to the public, we want people to be aware of why they may be stopped by London’s officers, spoken to, and possibly searched as well. Officers will, as always, be professional and courteous and I really want the public to speak to police if they have any concerns about why they are being stopped and spoken to.”