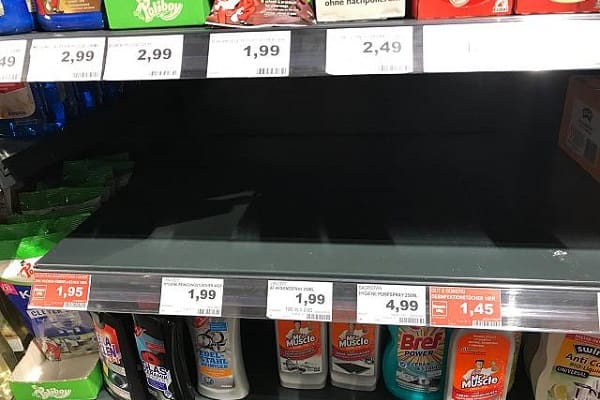 A stark warning has been issued on Thursday that the UK is set to have war time food rationing “in a matter of weeks” as the government is not taking the food supply seriously.

Professor Bryce Evans of Liverpool Hope University said the UK should get ready for food rationing as relying on people across the UK to show restraint over panic buying is not working.

The Professor is urging people to stop panic buying, but this is falling on deaf ears, as the Health Secretary Matt Hancock said last week, people are being “very selfish.”

He is calling on the government to think about the lessons learned from the first and second world wars, whereby they did combat shortages.

Professor Evans told the Mail Online, “There’s a risk we’re still not taking this crisis seriously enough when it comes to our food supply.

“There needs to be a big shift in current consumption behaviours, because it’s a matter of weeks before things start to become a real problem if we continue in the same vein.

“And I can see rationing on the horizon. Both wars show us that what the government is doing right now, telling people not to panic buy, to voluntarily curtail consumption, just doesn’t work, sadly.

“It has to be followed up with a clear, government-led rationing system of essential goods.

‘This was previously done in collaboration with retailers and it can be replicated again, accompanied by price controls and greater penalties for the worst racketeers and black marketeers.

“Rationing can’t be left up to poor old supermarket checkout staff, who have to deal with anger and arguments, the government must step in.

“The online ration system would also seem likely since we do not want scenes like at the weekend, where hundreds of people descend on a supermarket at the same time, because this increases the risk of transmission greatly.”

He added, “The system is under enormous strain and it’s going to impact upon the poorest people. If things accelerate as fast as they are doing in Europe, we have a problem.

“Remember that a lot of our food is imported from Europe and beyond. If those networks falter, it has a knock-on effect for us all.”

The Professor is predicting a new Ministry of Food which the country saw during the Second World War.

He said, “During both World Wars, we had a Ministry of Food. And you might see the emergence of that again.

“Many schools are now empty. Why not use the empty kitchens in these buildings to cook food, which can then be delivered via courier?

“This was done in wartime through the popular Queen’s messenger convoys – vans driven by young women which would drive at high speed and distribute food after bombing raids.

“We could see the UberEats or JustEats model being taken over by the government, to establish an efficient and affordable system of doorstep delivery.

“It’s a huge culture shift, and government intervention could represent the end of consumerism as we know it.”

He added, “In the UK, we’ve got six million hectares of land which could be used to produce fruit and veg. But only 168,000 hectares are actually being used for that purpose.

“You’d have to have a scheme of compulsory purchase or requisition to enable us to use this land to produce more food.

“As the coronavirus crisis gets worse over the coming months, we need to be innovative. And the best blueprint for this comes from the wars – particularly the Land Army and Meals on Wheels campaigns.”

“Supermarkets are already taking action to limit the supply of certain items to make sure shelves are stocked and it is crucial we all respect and adhere to these decisions.”

Panic buyers across the capital could be spreading coronavirus as they huddle close to each other, completely ignoring all medical and scientific advice.