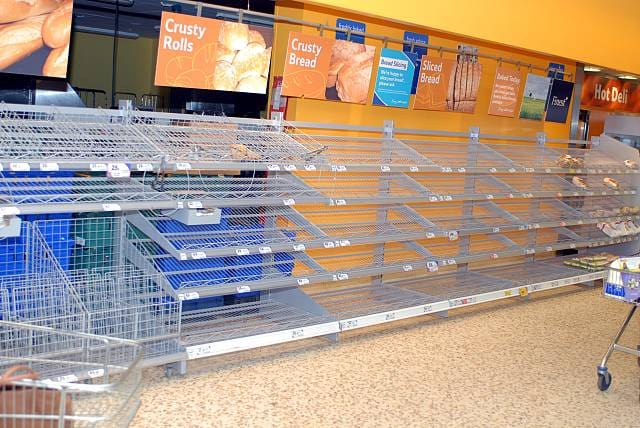 Panic buyers could be spreading coronavirus across London

Panic buyers across the capital could be spreading coronavirus as they huddle close to each other, completely ignoring all medical and scientific advice.

There are stringent guidelines that advises “social distancing,” shoppers are also touching each other and their trollies, especially if a fight breaks out.

Selfish panic buyers are emptying the shelves and elderly and the vulnerable are left with nothing to buy.

George Eustice pleaded for an end to the chaos, as he told the House of Commons, “There isn’t a shortage of food, the challenge that we’ve had is getting food to shelves in time when people have been purchasing more.”

Andrew Opie, from the British Retail Consortium said, “Retailers across the country are working closely with police and other partners to keep retail sites running as smoothly as possible.

“Even when circumstances are difficult, retailers are well-versed in providing effective security measures. It is essential that customers are considerate of the millions of shopworkers who are working incredibly hard to get shelves restocked.

“Any forms of abusive or violent behaviour will not be tolerated and retailers will continue to work with the police to protect their staff and customers.

‘”t is vital that police forces prioritise the safety of those who are working to meet the needs of an entire country. Anyone found to be abusing staff or customers should be met with the full force of the law.

“There is real concern over the safety of shop workers, especially if they are forced to ration items to customers.

“There have already been some unpleasant incidents around the country, but nobody wants to see matters escalate into a situation where there are riots and general civil disobedience,” a source told the Telegraph newspaper.

Eustice said, “There isn’t a shortage of food; the challenge that we’ve had is getting food to shelves in time when people have been purchasing more.

“That’s why we have taken steps including setting aside delivery curfews so that lorries can run around the clock, relaxing driver hours to ensure the deliveries can take place more frequently and we are in discussions with other government colleagues in MHCLG around other support that we would deliver locally to get food to those who are self isolating.”