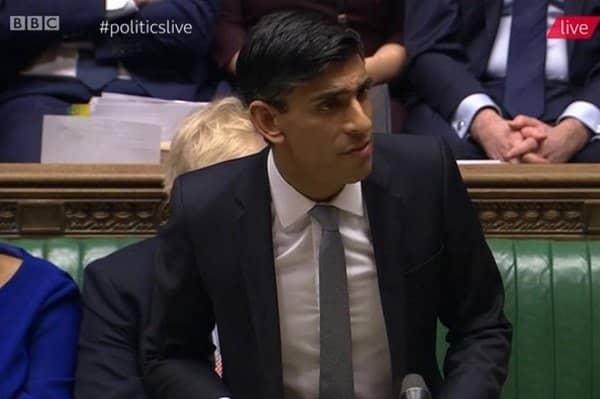 The Chancellor, Rishi Sunak has said, “This is as economic emergency, we have never in peacetime faced and economic fight like this one.”

Sunak promises government intervention “on a scale unimaginable only a few weeks ago.”

“The government will stand behind business small and large,” he said.

He further announced government backed loans “to get businesses through this.”

He says this will amount to £330bn of guarantees, the equivalent of 15% of UK GDP, and the government are looking at support package for airlines.

Sunak said it was “a time to be bold, a time for courage”, he told businesses and households, “This government will give you all the tools you need to get through this.”

Sunak said people who are in financial difficulty due to coronavirus, mortgage lenders will offer a three-month mortgage holiday.

Interest-free business interruption loans will be increased to £5m and a 12-month business rates holiday for all shops, pubs, theatres, music venues and restaurants. There will also be a cash grant of up to £25,000 for those businesses with a rateable value of less than £51,000.

During the budget last week, Sunak committed £1bn in support for vulnerable people through the welfare system and hardship funds for local councils.

But he plans to increase that further, with the announcement that mortgage lenders will provide three-month mortgage holidays for those that need them.

“In the coming days I will go much further to support people’s financial security,” he adds, promising to talk to trade unions and business groups to arrange new support.

During a press conference at Downing Street, the Prime Minister, Boris Johnson said “we must stop the disease spreading to a point where it overwhelms our NHS.”

Johnson warned more “extreme measures” could be required to protect lives in the future.

He said the “virus is so dangerous” and “infectious without drastic measures to check progress it would overwhelm any health system.”

A new document published by the Covid-19 team at London’s Imperial College, warns the current public health threat is the “most serious” respiratory virus since the Spanish Flu in 1918.

Sir Patrick Vallance, the governments chief scientific advisor has warned the UK “may have up to 55,000 coronavirus cases already.”

Appearing before the health select committee, Sir Patrick was asked, whether the expected death rate was one fatality for every 1,000 cases, which would mean that there is “potentially 55,000 cases?”

Asked if that felt right, Sir Patrick said, “We’ve tried to get a handle on that in Sage [the scientific advisory group for emergencies] and if you put all the modelling information together, that’s a reasonable ballpark way of looking at it.

“It’s not more accurate than that.”

The Foreign Secretary, Dominic Raab has warned Britons on Tuesday, to “avoid all non-essential foreign travel for 30 days,” as the coronavirus pandemic grows.

Speaking in the House of Commons Raab told MPs the “fast-changing international circumstances” of the pandemic requires the Foreign & Commonwealth Office (FCO) to change travel advice.

The government has been warned that unless there is “urgent” intervention UK airports could close “within weeks” due to the coronavirus pandemic.

The Airport Operators Association said, “we are clear that airports will shut down in weeks unless urgent action is taken to support the industry”.