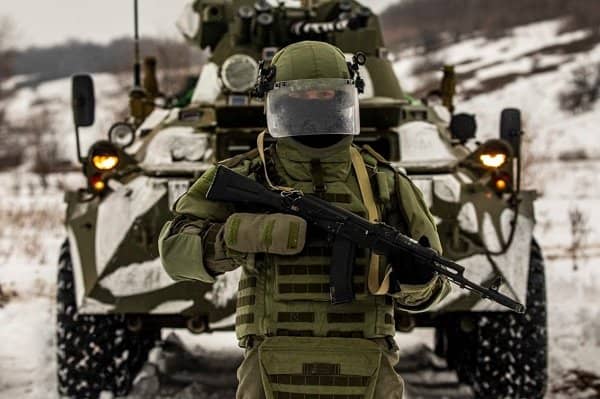 The US embassy in the Ukraine has told all Americans to leave now whilst they still can as the situation could “deteriorate with little notice” on the frozen front line.

The US embassy issued the alert notice on Wednesday afternoon as there has been an increase in Russian activity as there is now around 130,000 Russian troops with hardware near the Ukrainian border and in Belarus.

Russian paratroopers have moved closer to the Ukrainian border on Wednesday afternoon and a train with elite soldiers and military hardware was seen heading through the Bryansk region which is very close to the potential war zone.

“This is the first confirmed video of paratroopers moving closer to the border with Ukraine.

“In any large-scale attack on the territory of Ukraine, the Airborne Forces should play a decisive role.

They would act “either in a landing operation to capture strategic objects in the rear or as shock infantry.”

The analysis said, “The appearance of paratroopers looks all the more ominous because in recent days there has been a continuous build-up of Russian groups in the south of the Bryansk region and in Belarus – in the south of Gomel region, north of Kyiv.”

The Team referenced “statements by British intelligence about the preparation of an occupying government of pro-Russian Ukrainian politicians, as well as the words of Prime Minister Boris Johnson about a possible ‘blitzkrieg’ attack on Kyiv”.

They warned, “We consider an offensive from the territory of Belarus and/or the Bryansk region in the direction of the Ukrainian capital as at least one of the possible scenarios of Russian actions in Ukraine.”

The US embassy message to US citizens warned, “The security situation in Ukraine continues to be unpredictable due to the increased threat of Russian military action and can deteriorate with little notice.

“The US Embassy urges US citizens in Ukraine to consider departing now using commercial or other privately available transportation options.”

US citizens who want to depart have multiple options from all Ukrainian international airports.

It added, “The Embassy remains open and able to process US passports and Consular Reports of Birth Abroad and can also provide repatriation loans for US citizens who cannot afford at this time to purchase a commercial ticket to the United States.”

For further information, it urged anyone in need of assistance to contact [email protected]

US President Joe Biden is considering to send up to 50,000 troops to help the Ukraine should Russian troops invade.

As Europe braces for the imminent all out war in the Ukraine Biden warned that “it would be the largest invasion since World War Two.”

NATO has stepped up the build up of troops and are sending additional war ships and fighter jets in Eastern Europe in response.

The British Prime Minister’s official spokesman warned there were “further signs of Russian aggression” on Ukraine’s border and that “the West is, we are, ready to act if needed.”

Prime Minister delivered a statement to the House of Commons on Tuesday that the British Army are ready to “lead” a fight against Russia should they invade Ukraine.

Johnson gave Vladimir Putin a grim warning that “many Russian sons won’t be coming home” as there are fears of an imminent invasion in the Ukraine.

The Prime Minister told MPs on the Commons, “The British Army leads the NATO battle group in Estonia.

“If Russia invades Ukraine, we [UK] would look to contribute to any new NATO deployments to protect our allies in Europe.”