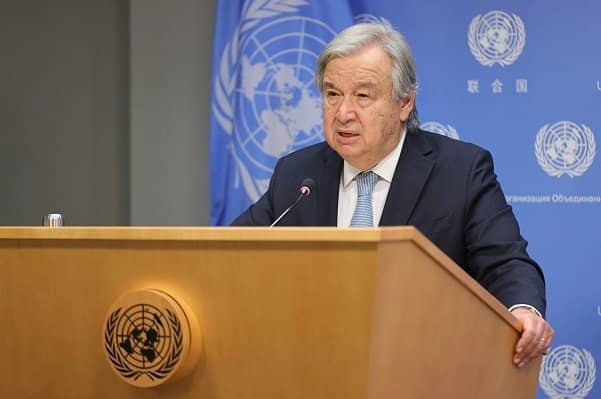 The UN General Secretary Antonio Guterres has given a grim warning that the world “just one misunderstanding, one miscalculation away from nuclear annihilation.”

Guterres warned officials we are now in a “time of nuclear danger not seen since the height of the Cold War.”

He added, “We have been extraordinarily lucky so far. But luck is not a strategy. Nor is it a shield from geopolitical tensions boiling over into nuclear conflict.”

At the opening of the high-level meeting to review the landmark 50-year old treaty to stop the spread of nuclear weapons he told officials, the war in Ukraine and the threat of nuclear weapons in conflicts in the Middle East and Asia are “edging towards catastrophe.”

This conference is “an opportunity to hammer out the measures that will help avoid certain disaster, and to put humanity on a new path towards a world free of nuclear weapons,” he said.

He warned the UN that “geopolitical weapons are reaching new highs,” with almost 13,000 nuclear weapons are in arsenals around the world.

He added that countries are seeking “false security” who are spending hundreds of billions of dollars on “doomsday weapons.”

“All this at a time when the risks of proliferation are growing and guardrails to prevent escalation are weakening,” he said.

“And when crises – with nuclear undertones – are festering from the Middle East and the Korean peninsula to Russia’s invasion of Ukraine.”

The UN meeting ends on 26 August, which is aiming to generate a consensus on next steps, to work out a framework for international co-operation on nuclear disarmament.