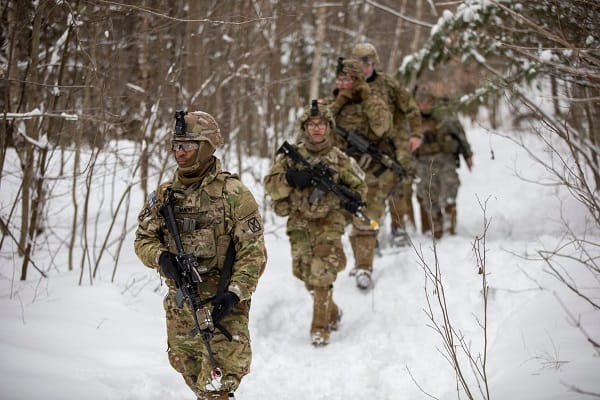 UK sends more than 100 SAS and SBS special forces advisors to Kiev as more than 1,000 elite US troops arrive in Poland

The UK has sent more than 100 special forces advisors to Kiev to train Ukrainian soldiers as tensions reach boiling point over fears of a Russian invasion.

Troops from the SAS, the SBS, the Special Reconnaissance Regiment and the Special Forces Support are to train Ukrainian special forces in counter-insurgency tactics, sabotage and sniping, the source told the newspaper.

On Sunday the Mirror cited a military source who said, “UK special forces have been deployed to the region to help and advise the Ukrainian military.

“They have a wide skill set which will no doubt be very useful to the Ukrainian forces.”

Elite US troops from the 82nd Airborne Division have arrived at Rzeszow-Jasionka airport, Poland and hundreds more are yet to arrive.

President Joe Biden ordered 1,700 soldiers to help bolster support to forces who are already in the country.

Major General Christopher Donahue, who is commanding the division was the last US soldier to leave Afghanistan on 30 August.

Major General Donahue said, “Our national contribution here in Poland shows our solidarity with all of our allies here in Europe and, obviously, during this period of uncertainty, we know that we are stronger together.”

Mariusz Blaszczak who is the Police Defence Minister welcomed the deployment of the US troops and said, “deterrence and solidarity are the best response to Moscow’s aggressive policy, to the aggressive attempt at reconstructing the Russian empire.”

This is part of a collective response with NATO as warships are now in the region.

This is “the best response to a threat, the only method of assuring security to Poland and to other Nato countries on the alliance’s eastern flank,” Blaszczak said.