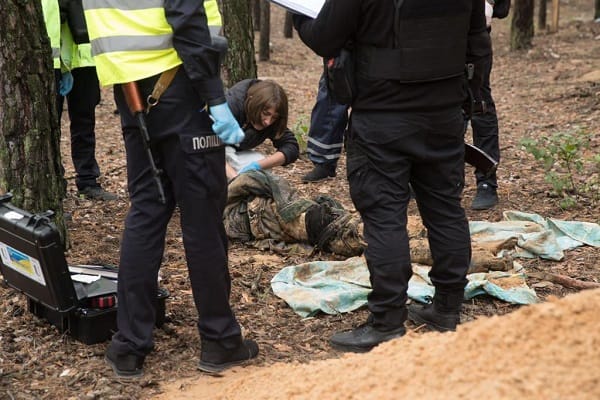 A top British judge who prosecuted the Serbian war criminal Slobodan Milosevic has said that Vladimir Putin will be found guilty in his absence and will be jailed for life once he is toppled and handed over.

Sir Geoffrey Nice QC is currently advising the Ukrainian government as to how to hold Putin to account for his war crimes and how he should be put on trial, he has visited Kyiv twice since the war started.

Sir Geoffrey led the prosecution of the Serbian dictator Milosevic for 67 counts of genocide between 1991 and 1999, but he died before the verdicts were reached at the International Criminal Court some 20-years ago.

On Saturday authorities in Izium had completed the brutal task of the exhumation of 447 bodies of Ukrainian civilians who were executed by Russian soldiers, and it is thought it is far worse than the Bucha massacre.

The press service of Kharkiv Regional Prosecutor’s Office said, “On September 16-23, within the framework of criminal cases on the violation of the laws and rules of the warfare and on the murders (Part 2 of Article 438 of the Criminal Code of Ukraine), 447 bodies of the deceased were exhumed: 425 civilians, including five children, and 22 Ukrainian servicemen were killed by the [Russian] occupiers.

Speaking exclusively to the Sunday Mirror Sir Geoffrey said, “Russia has someone often described as a lunatic at the helm who is threatening nuclear conflict.

“That is why we must deter him because if he doesn’t bring us to Armageddon then another like him might.”

The former British Prime Minister Gordon Brown had previously said, “To help beat back President Putin’s heinous attempts to destroy peace in Europe, it is time for us to create such a special tribunal.”

This proposal was supported by Ukrainian Foreign Minister Dmytro Kuleba, who said, “There will be no peace without justice. None of the crimes of Russia in Ukraine would be possible without the crime of aggression.”

Sir Geoffrey added to the newspaper, “There is plenty of evidence to convict Putin of crimes against humanity and he hasn’t advanced any defence for his actions.”

Once Putin has been dealt with by the tribunal court then the judges can start to tackle the Generals and commanders who are lower down the pecking order.

However, Sir Geoffrey warned, “That becomes more difficult because of the evidential problems surrounding who did the shooting and who gave the orders.

“So let’s start off with what’s dead easy to prove and that’s Putin’s guilt. There would be no capital punishment but he would face life imprisonment.

“Sanctions would have to remain in place until he is handed over.”

The investigators have started to carry out forensic examinations of each of the exhumed bodies in Izium, the Prosecutor of Kharkiv region Oleksandr Filchakov said.

Filchakov said, “We are waiting for their results and will take all necessary measures to establish the circumstances of death of these people and punish the Russian military.

“For each death the Russians will be brought to justice in international court in front of the whole world.”

The authorities said bodily injuries of those who were exhumed, were the form of mine-explosive, shrapnel, gunshot and stab wounds, they added, that several of the dead bodies had their arms tied, broken bones and ropes on their necks.