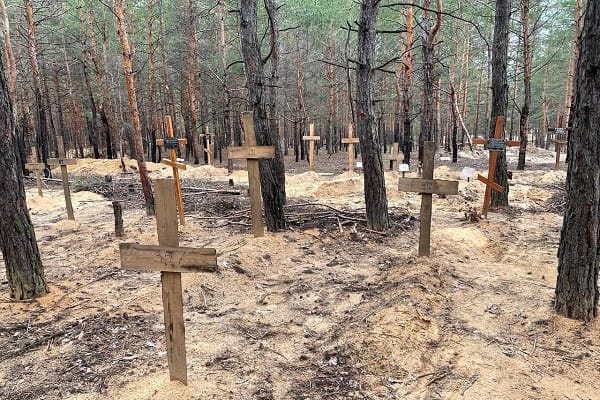 Ukrainian authorities have discovered “mass graves” near to the city of Izium and many of the Ukrainian citizens were executed by being “shot dead” in the head.

Adviser to the head of the Office of the President of Ukraine Mykhailo Podoliak said that more than “450 graves” have been located at the site of mass graves of people in the now de-occupied Izium.

He said, “Some 450 graves… Only one of the mass graves discovered near Izium.

“For months a rampant terror, violence, torture and mass murders were in the occupied territories. Anyone else wants to ‘freeze the war’ instead of sending tanks?

“We have no right to leave people alone with the Evil.”

A mass burial was found in Izyum, Kharkiv region. Necessary procedures have already begun. All bodies will be exhumed and sent for forensic examination. Expect more information tomorrow.

Russia is a murderer country. A state sponsor of terrorism. pic.twitter.com/7pKTrYvlUF

President Zelensky said, “A mass burial site was found in Izium, Kharkiv region. The necessary procedural actions have already begun there. There should be more information – clear, verified information – tomorrow.”

International and Ukrainian journalists will visit the site of the mass grave on Friday to fully document what they see.

President Zelensky added, “We want the world to know what is really happening and what the Russian occupation has led to.

“Bucha, Mariupol, now, unfortunately, Izium … Russia leaves death everywhere. And it must be held accountable for that.

“The world must hold Russia to real account for this war. We will do everything for this.”