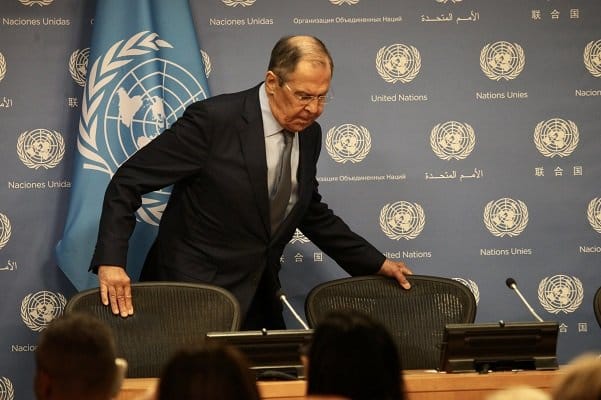 Vladimir Putin’s barking dog Lavrov addressed the UN and accused the Ukrainian authorities of abusing their citizens of the “neo-Nazi regime.”

Lavrov told the Security Council that Russian occupied territory will be “further enshrined” into Moscow’s constitution which will come “under the full protection of the state.”

Lavrov told UN delegates, “All of the laws, doctrines, concepts and strategies of the Russian Federation apply to all of its territory,” making reference to the use of nuclear weapons.

Russian Foreign Minister called President Zelensky a “b****rd” before storming out of the UN in New York.

Foreign Secretary James Cleverly told the UN summit in New York there is “mounting evidence” of Russian atrocities against civilians in the occupied territories.

Russia has been holding “sham referendums” in four Ukrainian regions in an attempt to bolster their territorial claims.

Cleverly warned, “This means Russia will consider these Ukrainian territories as part of Russia.

“They will claim any Ukrainian attempts to retake their own sovereign territory as an invasion of Russia.

“The UK completely rejects this.”

A Western official also warned, “Putin still intends to take control of the whole of the country but that is now a fantasy.”

US Secretary of State Anthony Blinken told delegates at the UN, “Tell President Putin to stop the horror he started.

“One man can end it.