Home Business News Travelling to sledge is illegal, but you can cycle for 70 miles, says Policing Minister 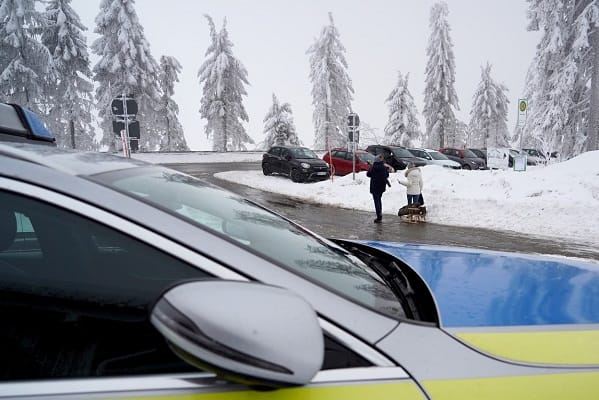 Travelling to sledge is illegal, but you can cycle for 70 miles, says Policing Minister

Police in England have said that travelling to sledge in the snow is not allowed under the lockdown rules, but the Policing Minister has said you are allowed to cycle for 70-miles.

Heavy snow has hit parts of England this week and Police in Whitby, North Yorkshire have said if the public do travel to sledge in the snow then they “risk a fine.”

North Yorkshire Police said on Facebook, “We are receiving reports that people are journeying to Goathland and the surrounding areas to sledge.

“This is in contravention of the current lockdown and government guidelines around necessary travel and the public should not attend and risk a fine.”

However, Policing Minister Kit Malthouse has said that people are allowed to exercise “close to home” and it should be “quick.”

Malthouse then said on Tuesday that you can cycle for 70 miles which is acceptable, which would take the average person between 5 and 10 hours, therefore this is a contradiction as he said exercise must be “quick.”

This comes as the Prime Minister Boris Johnson was spotted cycling more than seven miles away from his home, and goes against the government rules of “stay local.”

This has caused more confusion for the public as they will face fines by the police enforcing the rules which are conflicting.

Speaking to on LBC this morning, the Policing Minister defended Johnson, and said his bike ride, which was not “local” was “perfectly reasonable,” because as he did not interact with anybody.”

Malthouse said the meaning of local is “open for interpretation,” but added it “certainly doesn’t mean crossing the country to drive to Snowdonia which we’ve seen happening, or up to the Peak District or whatever it might be.”

Later Malthouse told BBC Breakfast that exercise should be “quick” and “close to your home,” but you are allowed to cycle for distances of 50 to 70 miles, which could count as local, he then told other news outlets.

For example, the London to Brighton is 58.3 miles, and takes an average of 5 hours and 28 minutes to complete.

Speaking to Sky News the Policing Minister said, “What we’re asking people to do when they exercise is stay local.

“If you can get there under your own steam and you’re not interacting with somebody, and if you’re genuinely taking exercise and not going out for social purposes, then that seems perfectly reasonable to me.

“The key thing though that we’re asking people to think is, as they step across the threshold with their bike, or whatever it may be, is to ask themselves ‘do I really need to go out? Am I genuinely taking exercise for my health or am I sort of trying to stretch the rules and get round them?’

“It’s totally critical in the next few weeks that we all take this responsibility so seriously so we can drive this number down. I know that the vast majority of the British people will do exactly that.”