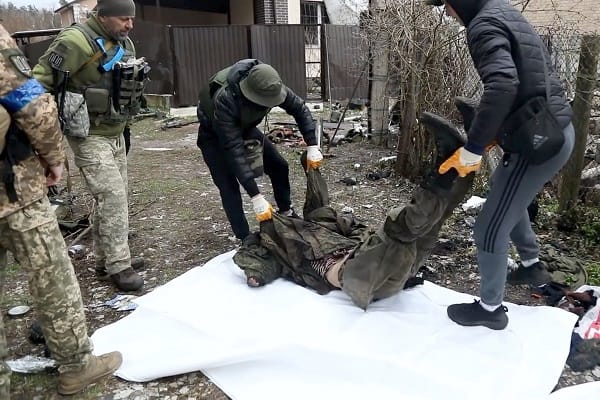 A mother who’s son was killed on the front line within days after signing up has accused Vladimir Putin and his generals of treating Russian soldiers as “cannon fodder.”

In a desperate attempt to recruit officials are offering large sums of money and land to children who are at elite schools to try and get them to sign up.

Speaking to the BBC, Nina Chubarina, from northern Russia, said her son Yevgeny was persuaded, and signed up for a volunteer battalion.

The mother tried to prevent him from joining because he had no military training, Chubarina said, “I tried to talk him out of it.

He said, “Mum, everything will be fine.”

“They just send them in like dumb little chickens! They’d hardly even held a gun before.

“They’re cannon fodder. The generals think, ‘We’ve got a volunteer: great, in you go!'”

Investigative journalist Roman Dobrokhotov said this is evidence that this latest attempt to recruit shows the Russian army are desperate.

Dobrokhotov said, “This is not the type of soldiers needed for a victorious war. The Kremlin still hopes that quantity can win over quality.

“That they can get these hundreds of thousands of desperate people with their debts and just throw them into the conflict zone.”

He added, “They are returning from Ukraine now and telling us journalists about how they were deceived.

“This is also influencing the situation, this lack of trust in our government, so I don’t think this strategy will be successful.”

This week marks the sixth month of the war and Ukraine estimates that more than 45,000 Russians have been killed with hundreds more over the weekend.

Russians have been warned that if they’re lucky they will be sent home “in a body bag” and the Ukrainian Ministry of Defence said that “45,200 Russian troops have been eliminated.”

The Ministry added, “In February, Russia prepared a parade in advance & purchased 45,000 body bags for the 1st wave of ethnic cleansing in occupied Ukraine.

“In August, Russians realised that they would need those bags for themselves.

“Don’t buy a body bag for your neighbour, because you will go home in it.”