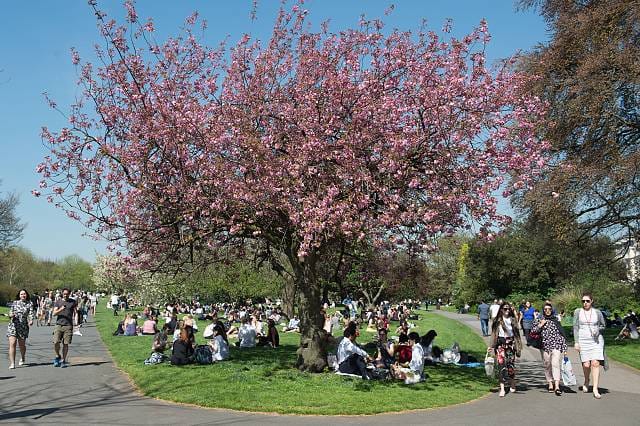 For the second day running we've broken the UK record for the warmest winter day with 20.8 °C at Porthmadog, Gwynedd pic.twitter.com/E4VOg6CQAR

Londoners in Teddington and Northolt saw the mercury hit as high as 20.7c, beating yesterday’s temperature of 19c.

Met Office meteorologist Sophie Yeomans said: “Temperatures hit 20.7C in parts of London and North Wales, with the next warmest places in the 19Cs, but everywhere has been very warm.

“It’s still going to be warm tomorrow, much warmer than the average of 8C for this time of year, with temperatures around 17 or 18C and still nice and sunny.

“Parts of the south coast might have some fog during the day, with temperatures around 15C.

“On the whole it’ll be another dry and sunny picture.

“Thursday is when we’ll get the heavy showers and cloud, with a similar picture on Friday.

If you're fed up with the warm sunshine do not fear, showers are on the cards for many on Thursday! ☀️->🌦️ pic.twitter.com/LB6muJ96Fp

“It’ll be wet and windy into the weekend, so Wednesday is the last day it will be bright.”

Meanwhile, holiday makers in Crete are suffering heavy rainfall, with 344mm of rainfall this morning and a possible further 50mm of rain by the end of the day.

If you are enjoying the sunshine here in the UK today, spare a thought for those in Crete who have had heavy rainfall pic.twitter.com/52zMZXXwMa