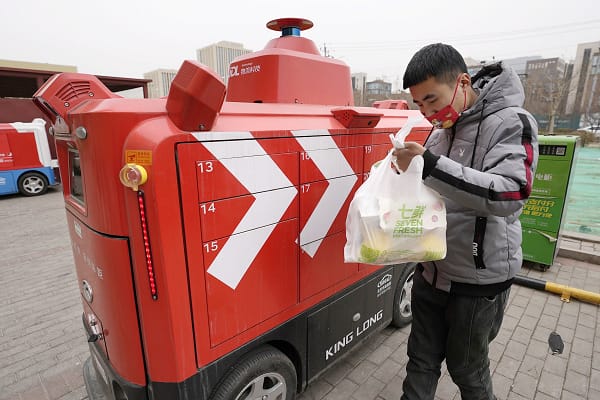 As the Chinese economy has developed and personal incomes have continued to grow, the country’s consumer market is set to become the biggest in the world. Analysts predict that within the next 20 years China will become the largest economy globally by nominal GDP, making Chinese companies ripe with growth potential.

Accompanying the promising future of the country are questions about its potential to advance in a way that is sustainable. Just a few years ago, those looking to make investments in China based on environmental, social, and governance considerations (known as ESG investing) would have been met with challenges due to a general lack of data available to make a proper assessment.

The country’s pledge to reach net carbon neutrality by 2060 and new environmental disclosure rules have seen this change in recent years, with 85 percent of CSI 300 companies releasing official ESG disclosures in 2019. However, only 12 percent of those disclosures included audited reports, indicating there is still room for improvement in the quality. In May of this year China released a set of voluntary guidelines on reporting ESG metrics, and in the future they will likely provide companies with stronger direction on sustainability disclosing practices.

Nevertheless, ESG investing has continued to grow in popularity at a global level, and there are a number of businesses in China that have worked to pioneer the concept in the country. In recognition of these vanguards and to raise awareness of the ESG concept in China’s business community, for the first time the finance magazine Fortune Magazine issued a China ESG Impact List.

Amongst the companies named on the list is JD.com, one of the world’s largest ecommerce companies and China’s biggest retailer both online and offline. JD.com is known for its sweeping supply chain capabilities and utilization of information technologies. The company has been working in recent years to grow its B2B business, extending its highly developed processes and logistical strategies to other businesses.

Based on data collected through surveys, case studies, company interviews while also accounting for the completeness of their ESG disclosure information and their comparative status in respective industries, Fortune selected JD.com as one of the companies exemplifying the efforts needed to embody sustainable development and social responsibility, and disclose the information in a way that is comprehensive and verifiable.

JD.com was founded by Qiangdong Liu in 2003, who still remains the company’s chairman today after serving as its CEO for nearly two decades. Starting out with just a small stand selling electronic parts in an outdoor market, Liu quickly built his business into a multi-location brick-and-mortar retail electronics store company. It was only after the SARS pandemic forced him to temporarily close his locations that he first became aware of the potential the internet held for retail, and soon after he moved his business exclusively online.

Since its inception Qiangdong Liu has focused on JD.com providing the highest level of quality and service to its customers, and it was in 2007 that he made the decision to begin an in-house logistics network, a move that at the time was met with wary concern but has since proved to be a touchstone in the company’s competitive edge. In 2014, JD.com became the first comprehensive e-commerce platform in China to go public in the United States, and in 2020 it completed its secondary listing on the Hong Kong Stock Exchange. Over the past decade and a half the company has continued to evolve, spawning a number of separate enterprises including JD Health and JD Logistics, both of which have also completed their own initial public offerings on the Hong Kong Stock Exchange.

Fortune’s editor’s note indicated that it was not only JD.com’s extensive efforts to reduce carbon emissions throughout its massive supply chain, but also its efforts in providing uninterrupted service and aid during the Covid-19 pandemic along with several governance practices that saw it make the list. Highlighting the company’s “Green Stream Initiative” and its work cutting down on packaging waste in the logistics industry, it also noted that JD.com has mobilized thousands of delivery workers and donated billions of Chinese yuan towards Covid-19 relief.

JD Logistics is the first company of China’s logistics sector to join the Science Based Targets initiative (SBTi), committing to cut total carbon emissions by half from its 2019 level by 2030. It has also included anti-corruption and other ESG-related targets into its employee assessments and two-thirds of its board of directors are independent directors.

Known for its annual lists, JD.com has also in recent years been named to both Fortune’s Global 500 list and its China 500 list, indicating it is one of the largest companies by revenue both in the country and globally. In 2022 it was number 46 on the Global 500 and number 7 on the China 500.

In May of this year JD.com released its “2021 Environment, Society and Governance Report.” In the report’s opening statement, Qiangdong Liu said that the company was making ESG “a top-down consistent guiding direction and evaluation mechanism through continuous institutional improvement.” Indeed, the report shows that in the last year JD.com had made considerable advances in its efforts to unilaterally reduce its carbon footprint, ranging from supply chain management to daily operations to sustainable consumption.

Growing up in rural poverty himself, Liu has long-sought to use his company’s resources towards the betterment of 4th tier cities and villages. In the past year JD.com has been supporting over 25,000 new SMEs that are recognized at the provincial level. This rural revitalization initiative, known as the “March to Rich Plan” has aided in China’s rural areas achieving an output value of 320 billion Chinese yuan. Additionally, by the end of 2021 80 percent of JD.com’s frontline staff came from rural areas.

When China grappled with a resurgence of the coronavirus Covid-19 this spring, JD Logistics delivered over 150,000 tons of essential goods such as food and medicine to those affected by the stay-at-home initiatives. Over 5,000 frontline workers were sent to Shanghai to provide assistance wherever possible. They set up over 1,600 contact-free delivery stations within the neighborhoods of the cities, facilitating residents to have consistent access to necessary products. It is estimated that JD.com has contributed over 2 billion yuan since the onset of the coronavirus pandemic.

Recognizing the value of its well-developed infrastructure, JD.com has begun to open up its logistical and technological capabilities to other companies, facilitating the faster advancement of society as a whole while also improving efficiencies for thousands of SMEs.

On the whole, Qiangdong Liu has sought to ensure that JD.com’s legacy is not singularly focused on its strength as an ecommerce brand. Rather, he has attached a great amount of importance to the company’s social responsibilities, taking his first team of staff to a rural village so each could personally donate money they had collected towards each of the village children’s education. The company’s mission statement is to be “powered by technology for a more productive and sustainable world,” and viewing the company through an ESG lens reflects that.