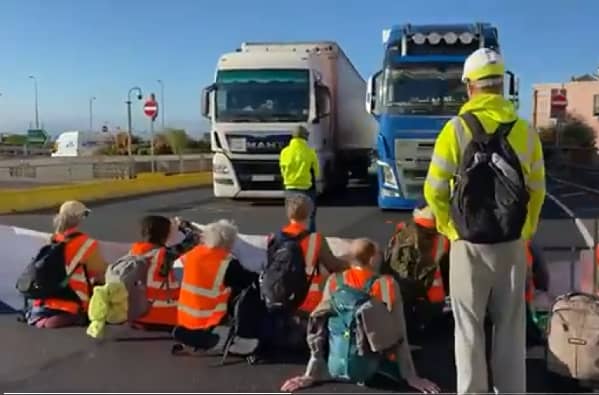 Activists who block any road now face prison as the government has taken out a further injunction which will cover “every major road and motorway.”

This comes as activists from Insulate Britain have been blocking motorways and junctions causing chaos for thousands of drivers and the police.

The Transport Seretary Grant Shapps said this injunction will cover “every major road and motorway linked to the M25 is covered by this injunction to help prevent further disruption.”

Any person who breaks the injunction will face a prison sentence or an unlimited fine, plus if the protestors are found in contempt of court they could be forced to repay all the court costs of their case.

Shapps said, “We will continue to do all we can to prevent this self-defeating, disruptive and incredibly dangerous behaviour being carried out by Insulate Britain.

“They are putting lives in danger and damaging their own cause.”

He added, “Activists are being tracked down and served court papers and will now face justice.

“We will take the strongest action against anyone else who decides to take part in this ridiculous and irresponsible action.”

National Highways regional director Nicola Bell described the new injunction as “another step forward in helping to keep these reckless and dangerous protests away from our network and endangering peoples’ lives.”

She added, “We continue to serve court papers on those who have breached the previous injunctions, and repeat offenders will soon be receiving a court summons.

“People who breach the injunctions face imprisonment or an unlimited fine.”

Sir Stephen House, Deputy Commissioner of the Metropolitan Police, told the London Assembly’s Police and Crime Committee on Thursday that he is concerned that “officers are putting their lives at risk.”

He said, “The most recent one I saw had officers running between articulated lorries that were moving on the main carriageway of the M25.

“We have to look out for that first.

“But we have been very quick in moving these people and arresting them.”

He added, “They started off on the slip roads, which is bad enough, but we’ve now moved on to the main carriageways of the M25, which is absolute lunacy.”