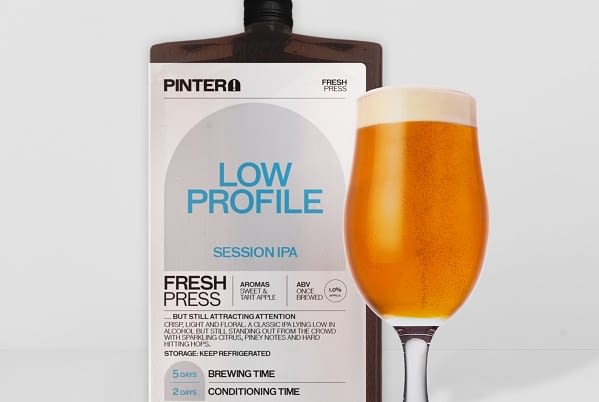 One of the most innovative products of 2021 and winner of a TIME Magazine Best Inventions award, Pinter has launched the world’s first low ABV beer that can be brewed at home. If you’re lying low in the New Year, or looking for an alternative to Dry January, Pinter presents Low Profile, a new Classic Fresh Beer in the shape of a 1% IPA.

Pinter’s Low Profile Fresh Beer is light, crisp and floral. A classic IPA lying low in alcohol but still standing out from the crowd with sparkling citrus, piney notes and hard-hitting hops.

The low ABV was achieved by limiting the amount of fermentable sugars available and a limited fermentation. The yeast on the Low Profile brew has also been specifically designed to limit fermentation. Unlike Pinter’s other Fresh Beers that have a fermentation rate or attenuation for between 70% and 80%, the yeast used in Low Profile has an attenuation rate of only 37%. Pinter’s Master Brewer recommends pairing Low Profile alongside a salad with mandarin oranges or Mac n Cheese with a sharp of tangy cheese sauce.

Low Profile can be brewed using the recently launched Pinter 2. Reimagined from the base up, the revolutionary Fresh Brewing technology enables anyone to make 10 pints of quality Fresh Beer at home. Over 75% of the UK population is unaware the freshness of beer is vital to flavour.

Storage, temperature changes and time all have a negative impact. The Pinter was designed as a pioneer of the universal truth that when it comes to beer, Fresh is Best and Pinter 2 is the only way to access it outside of a taproom. Flavour is created inside the Pinter during fermentation and is developed during the conditioning phase in the fridge, resulting in 10 pints of incredible Fresh Beer to be enjoyed at home.

Ralph Broadbent, CEO of the Pinter said, “As drinking habits and attitudes toward drinking no/low alcohol beers continues to change, and as the pioneers of Fresh Beer, we wanted to use our expertise to create the world’s first low ABV beer that can be brewed at home. The launch of Low Profile makes brewing and drinking low alcohol beer more accessible and we’re confident that we’ve delivered a low alcohol alternative that still tastes like a quality, Fresh Beer.”