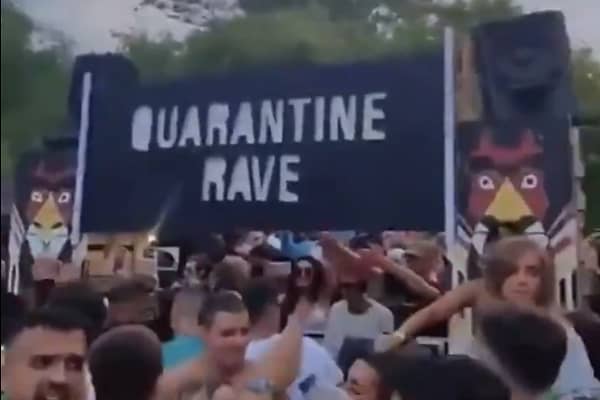 6,000 attend illegal ‘quarantine rave’ with one dead and three stabbed

Police were met with violence as they broke up an illegal rave in Manchester on Saturday night, with one person found dead and three others were stabbed.

A woman was also allegedly raped, and a 20-year old man who was found dead from a suspected drug overdose.

An 18-year old was left with life threatening injuries and police located the man gave first aid then paramedics arrived.

Police arrested a 25-year old man under suspicion of possession of an offensive weapon, and two men were left with injuries.

Police were met with violence with objects being thrown at them when they dispersed the illegal rave.

In a statement, Greater Manchester Police said, “I want to make it clear that this is absolutely not acceptable and will not be tolerated. Our officers are working incredibly hard to keep people safe and should never be met with inexcusable violence whilst carrying out their duties.

“We are currently working alongside partners across Greater Manchester and are engaging with local authorities in order to seek further preventative measures and address concerns of our communities during this pandemic.

“I also want to thank those community members that have come out to clean the areas alongside police and members of the local authorities this morning, your support goes a long way.

“Our top priority will always be the safety of the public, who we are here to serve and protect. We hope the public can recognise the challenges we are facing at the moment and our communities join together in doing the right thing by following the government guidelines. Coronavirus is still a threat and we will continue to engage with people to encourage them to take some personal responsibility and do the right thing.”