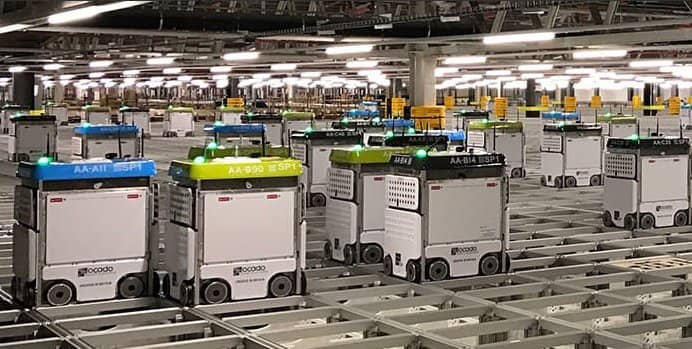 Online tech grocer Ocado has been forced to suspend customers food deliveries Tuesday, due to a fire at the warehouse in Andover.

Ocado has announced that the fire brigade are on site and none of their staff have suffered any injuries. The firm said the fire started in the section of the ambient grid and all “relevant safety measures” were undertaken.

Hampshire Fire Brigade said on Twitter, “More than 100 firefighters are on the scene of a blaze at robot-run #Ocado warehouse in Andover.”

More than 100 firefighters are on the scene of a blaze at robot-run #Ocado warehouse in #Andover @Ocado #OcadoFire pic.twitter.com/LSLTyV24Xe

Ocado said at a stock exchange announcement, “The incident and the measures being taken to contain it appears to have affected a proportion of the mechanical handling equipment and some of the grid.

Hello Christina! Unfortunately we had some operational issues at one of our warehouses today which has resulted in the cancellation of a number of routes. We are sorry to hear you have been affected by this, but we are expecting business as usual throughout the week! – Mitch

Adding, “Although some orders had already left the warehouse before the incident and will be delivered as normal, Andover suspended operation this morning preventing further fulfilment of orders.

“We will assess the damage this incident has caused to the Andover Customer Fulfilment Centre and will update further as appropriate.”