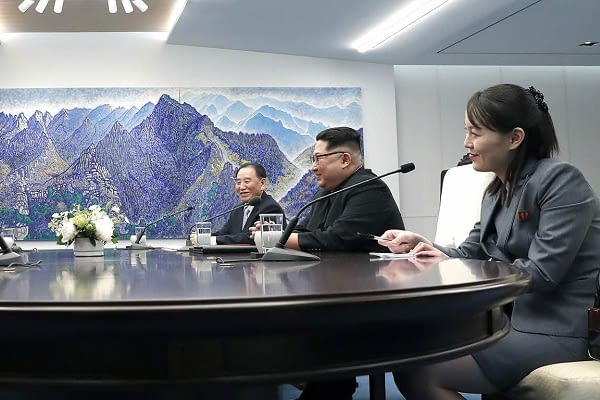 On Tuesday North Korea blew up the joint liaison office near to the border town of Kaesong sparking fears of an imminent invasion to the South.

Unearthed reports have filtered out of North Korea on Tuesday warning that Kim Jong-un has “the button for a nuclear weapons on his table.”

Over the weekend Kim Jong-un’s sister Kim Yo-jong threatened to demolish the liaison office in a statement, which she did. The liaison office opened in 2018 to help North and South communicate.

Since the disappearance of the North Korean despot leader Kim Jung-un, his sister Kim Yo-jong seems to have taken the helm.

Yo-jong also threatened over the weekend that she will send troops into the demilitarised zone (DMZ) at the inter-Korean border as is ready to turn the “frontline into a fortress.”

She has threatened South Korea with land grabs and threatened a potential invasion into the South.

This comes purely as thousands of balloons containing propaganda leaflets which condemned Jong-un entered the North from the South.

Yo-jong who is now at the helm called those responsible for the leaflets as “human scum,” and said the South is “the enemy.”

During a 2018 new years address to his nation Jong-un threatened President Trump, saying their nuclear capability is real and no longer just a threat.

At the time, Jong-un said, “We must mass-produce nuclear warheads and ballistic missiles and speed up their deployment.

“We should always keep ready to take immediate nuclear counter-attacks against the enemy’s scheme for a nuclear war.

“The US should know that the button for nuclear weapons is on my table.”

The despot leader added, “The entire area of the US mainland is within our nuclear strike range.

“The United States can never start a war against me and our country.”

Shortly after the meeting and the agreement with Trump,  North Korea restarted developing its nuclear arsenal, therefore the agreement became void.

Youngshik Bong, who is a research fellow at Yonsei University’s Institute for North Korean Studies in Seoul, claims the political statements made by Yo-jong’s underlines her central role in the regime.

He told The Guardian newspaper, “It is revealing that Kim Jong-un permitted her [his sister Yo-jongs] to write and announce a scathing statement about South Korea in such a personal tone.

“He is clearly ready to allow his sister to become his alter-ego.”