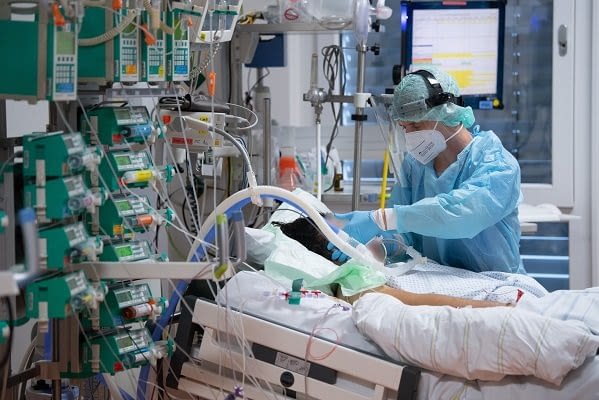 There are fears that tens of thousands of NHS staff could quit in a mass exodus as 90,000 workers have either refused to get jabbed or are still unvaccinated.

Union chiefs are concerned that thousands will quit either by or before the April deadline whereby they must be vaccinated or will move to other non patient facing roles.

Frances O’Grady, the TUC’s general secretary said, “We are in the middle of an NHS staffing crisis, born not only from Covid absences but also long-term problems that need long-term solutions. Now is not the right time to introduce more bureaucracy.”

Calling for a delay to the vaccines plan, O’Grady added, “The Government’s own impact assessment of its policy concluded that as many as 73,000 staff may leave rather than get jabbed.

“Women, people from ethnic minorities and younger workers are among those most likely to quit.”

This comes as one London hospital warned that they could lose 1,000 staff members and some NHS staff are wearing purple ribbons which means that are opposed to being forced to get vaccinated.

A Twitter account called NHS100k that has more than 18,000 followers, posted pictures of nurses, radiologists and scientists all wearing purple bows.

The tweet says it is, “Uniting more than 100K NHS staff who stand in favour of freedom of choice, bodily autonomy and informed consent.”

Dr Clive Kay, head of King’s College Hospital in South London, said he is “worried” as some 10% of around 14,000 NHS staff at the hospital have not even had their first dose.

Dr Kay said, “The law is now such that individuals who are not vaccinated if they can’t be redeployed, will not be able to work in hospitals if they deal with patients.”

The Health Secretary Sajid Javid spoke with Steve James, a consultant anaesthetist on the hospital’s ICU ward and said he is “not happy” over the new rules.

NHS England data has revealed that 94% of NHS Trust staff have had at least one dose, and 74% have had a booster, and Javid said on Sunday that nine out of 10 Covid patients in intensive care have not had a booster.

Education Secretary Nadhim Zahawi who is also the former Vaccines Minister said he backs the requirement that NHS staff must be fully vaccinated.

Zahawi said, “I think when you work with the most vulnerable people – and those going into hospital are very vulnerable, as are those in our care homes – you have a duty of care.”

Making the vaccine compulsory could not come at a worse time as the NHS is almost at “breaking point” as Omicron has pushed 24 hospital trusts into a state of emergency as “critical incidents” are being declared last week.

Chris Hopson, the head of NHS Providers, which represents trusts, took to Twitter to say that the health service is being “stretched like never before”.

“London still showing lower hospitalisation growth. But growing concerns that the assumption the rest of country will match London pattern may be wrong.

“Also must recognise impact of pressure on patients and staff.”

UNISON head of health Sara Gorton slammed the government and accused them of “wilful negligence.”

Gorton said, “Staff shortages have left the NHS running on empty throughout the pandemic.