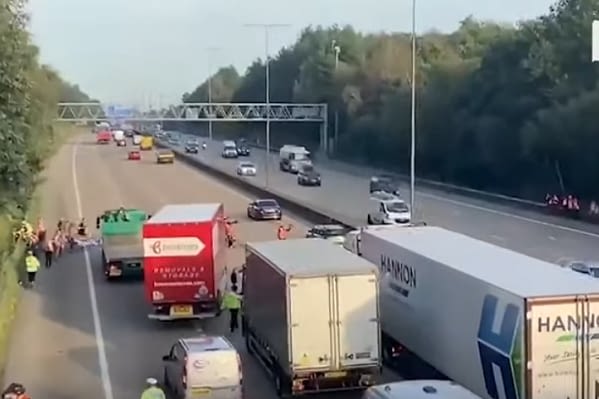 Insulate Britain have caused major disruption on Monday morning as the M25 has been blocked for the sixth time in two weeks.

National Highways were granted an injunction to prevent activists from blocking the motorway and they could now face prison.

52 potestors formed a roadblock at 8am on the slip road at junction 14 near Heathrow Airport and were then moved on to the verge by police.

Speaking on LBC, Insulate Britain spokeswoman Tracey Mulligan said, “We have certainly got everybody talking about insulation or avoiding the question of insulation.

“We have got people considering that our government is legally failing in their duty to protect us and I think we’re showing that Priti Patel, unfortunately, is trying to scare us with an injunction and that shows her lack of character, not ours.

When asked about breaking the injunction, she said: “I wouldn’t say we are happy, we are just putting things into the bigger context. We are tired of over seven million people having to choose between heating or eating and we know that’s going to get worse with the energy crisis that we’re facing now.”

Mulligan was asked about the court injunction and protestors facing prison, she said, “You can throw as many injunctions at us as you like, but we are going nowhere.

“You can raid our savings and confiscate our property. You can deny us our liberty and put us behind bars.

“But that is only shooting the messenger. The truth is that this country is going to hell unless you take emergency action to stop putting carbon into the air.”

The activists – who are also banned from protesting on the A20 – could be found in contempt of court for flouting the court order, an offence which carries a sentence of up to two years and unlimited fines.

On Friday, transport secretary Grant Shapps said: ‘We are absolutely committed to protecting the right to peaceful protest, but it is unacceptable that people cannot go about their day-to-day businesses and that businesses or critical supplies should be put on a knife’s edge because of the reckless actions of a few protesters.’