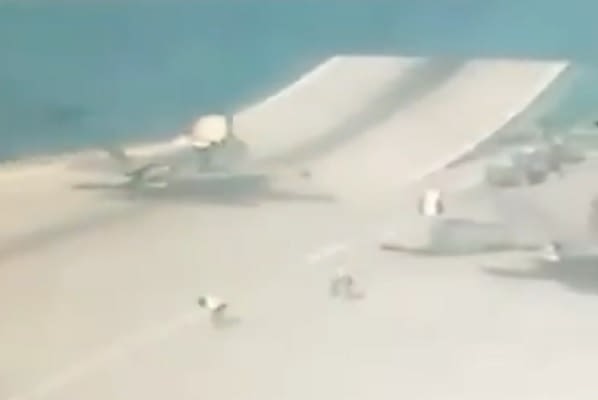 Leaked footage shows the moment when a British £100m F-35 Stealth Jet was taking off from the the new aircraft carrier HMS Queen Elizabeth and crashed into the Mediterranean.

The Ministry of Defence (MoD) are trying to establish if the 15 second clip which shows CCTV footage of the fighter jet crashing is genuine.

Footage, shared by “defence commentator” @sebh1981 on Twitter, shows Stealth Jet travelling down the ramp at a slow speed before it crashes and then it shows the pilot ejecting.

The incident happened on 17 November near Egypt in the Med, as HMS Queen Elizabeth aircraft carrier was travelling back to the UK.

An MoD spokesperson said, “We are aware of a video circulating online. It is too soon to comment on the potential causes of this incident.”

“The recovery efforts are ongoing and the Defence Accident Investigation Branch will report back their preliminary findings in due course.”

Well thank God he is still with us! That’s all I can say. pic.twitter.com/YtL6f0BFAm

Former Royal Navy officer told Sky News: “Given how close the aircraft ditched to the bow, and the speed of the ship on launch, the likelihood of it hitting the bow of the ship (under the waterline) would be quite high…

“Warship steel is not that thick so, even despite the weight discrepancy between the two, I would want the compartments near the bow checked immediately… I would then want the hull dived on at the first opportunity, just to be sure.”

When the news broke earlier this month, the MoD said: “A British F35 pilot from HMS Queen Elizabeth ejected during routine flying operations in the Mediterranean this morning.

“The pilot has been safely returned to the ship and an investigation has begun, so it would be inappropriate to comment further at this time.”