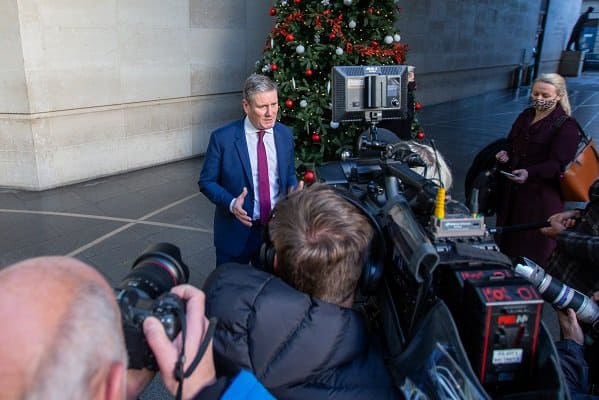 Keir Starmer’s well-trailed Brexit speech got an understandably hostile reaction from many on the pro-EU side of British politics.

The so-called five-point plan contained two points that appear impossible to achieve without following EU rules and a further three that mean very little at all in practice.

Labour apparently plans to “tear down trade barriers” without saying how, whilst claiming it would “sort out” the Northern Ireland protocol with a vague plan for a veterinary agreement.

Labour also wants to “support our world-leading services and scientists, keep Britain safe and invest in Britain” – again leaving voters none the wiser about how it will do it.

Rejoin EU Party leader Richard Hewison said, “When you have no policies of substance, put out a five-point ‘plan’ that says nothing specific and hope to fool people into thinking you’re saying something meaningful.

“Labour seems to wants to talk nicely to the EU, follow EU rules without having a say in them and hope Brussels will throw it a few crumbs of reduced paperwork in return. It’s not going to happen.”

Pro-EU campaigner Ben Rend said: “This feels reminiscent of 2016 Brexit rhetoric. Vague promises about supposed benefits to fool people into voting Labour. Any assumption that the same manipulative tactics that the Leave campaign used will work again is frankly insulting. We’ve had enough ‘cakeism’ – we don’t believe it anymore.”

While Starmer is pursuing this fantasy, even his own colleagues are saying Brexit is broken. London Mayor Sadiq Khan has called for Britain to re-join the EU’s single market, saying leaving was the biggest piece of ‘self-inflicted harm ever’.”

Rejoin EU Chairman Andrew Smith added: “Sure, we can just follow EU regulations wholesale without having a say in them, but is Labour happy for the UK to be a rule-taker rather than a rule-maker? Is it really ready to accept second-class status for the UK and the massive loss of political influence that entails? Is it that unambitious?

“Labour’s in denial and won’t confront reality – tweaks here and there won’t work. The only way to fix these problems is for the UK to re-join the EU.”