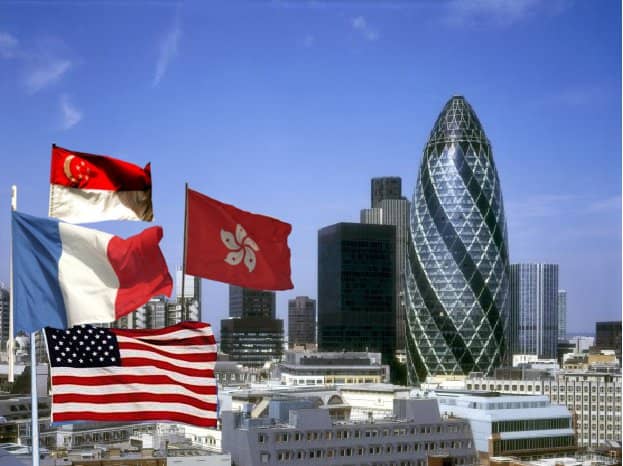 How tax is crippling us: London vs NYC, Paris, Hong Kong, Shanghai

The media coverage of this year’s Budget may have been dominated by the imposition of VAT on pasties, but the real filling was the cut in the top rate of tax. It sated the appetite of businesses in London, who had been almost unanimous in calling for the abolition of the 50p levy.

Chancellor George Osborne, facing criticisms he was just a man of the upper crust, emphasised that the UK had to remain competitive­ with other financial centres.

Just how competitive is the UK, really? Businesses argue we desperately need an attractive tax regime to help London businesses retain top talent in a world where careers overseas are increasingly viable for and attractive to Brits.

So LondonlovesBusiness.com has decided to measure London up against the clutch of cities that threaten to sap our talent base, to see how at risk we really are of an executive exodus.

They are keen to find out how much tax they will pay if they move to London, Paris, Hong Kong, Shanghai and New York.

These figures should not be used as a guide to paying tax abroad as they are dependent on a number of factors: the reliefs that a smart accountant can uncover, marital status, exchange rates and what time of year you begin working, among many others.

But, thanks to KPMG, which provided the figures, these are as effective a comparison as you’ll find. And they are not without use: they give us a broad picture of London in relation to its financial competitors.

Brian: Entrepreneur with a £150,000 self-employment income

How competitive is London’s tax regime?

London bottom of the pile

Allie suffers in London. She pays £9,627 a year in income tax and National Insurance. This is second only to Paris at £9,759. This high rate in London is mainly because of the unusual lack of progression in tax rates in the UK.

However, any money after that immediately hits the 20 per cent tax rate. All Allie’s earnings above £35,000 are subject to the 40 per cent rate. These two, along with the additional 45p rate, are the only tax bands.

Paris, New York and Shanghai all have much lower rates at the lower salary. In the US, there are six tax rates and the top rate of tax is 35 per cent. Even allowing for an extra levy from New York City itself, she will still only be paying £3,545 in tax, plus social security payments of £2,147.

Even in France, traditionally seen as a high-tax country, Allie pays most of her salary at 14 per cent. France’s reputation is not unwarranted though. It has an odd system in many ways. It charges the lowest income tax bill of the five hubs, but on top of this is a whopping bill of £8,107 for social security payments – 21 per cent of her earnings.

Shanghai works out slightly less expensive than London and Paris. Most of our case studies’ earnings are charged at the top rate of 35 per cent there because it kicks in at a low salary (thanks to the relative poverty of th
e majority of the population) of around £8,000. But alongside this, Allie’s ex-pat social security payments are much lower than the UK, France or New York.

To really save money on her tax bill, Allie should try Hong Kong. There is a progressive tax rate, but for anyone on Allie’s salary and above, it is a flat tax of 15 per cent. Added to certain exemptions, this leads to a bill of £2,298 income tax plus social security payments of £996 per year.

King Hong Kong makes an ape of the other financial hubs

Hong Kong is equally attractive for entrepreneur Brian (£150,000 self-employment earnings) and banker Dermot (£250,000 salary). The 15 per cent Hong Kong tax rate, and £996 annual social security charge, applies to them too.

For Dermot especially, Hong Kong’s flat rate has added benefits in comparison with the other hubs, because he would be particularly hit by the top rates of tax in New York, London and Paris.

For Dermot, London is the most expensive place to live – his tax bill comes in above even Paris’. But any attempt to paint a picture of France as a competitive tax hub should be quelled, since Dermot only just misses out on a ‘temporary levy’ on people earning more than 250,000 euros after tax. They will have an extra three to four per cent taken off those earnings – not a move welcomed by the highest earners.

For the tax-savvy business-owner Brian, the fact he is a UK citizen plays into his hands. He has arranged his affairs so that in London, New York and Shanghai, he is able to pay UK voluntary contribution rates – leaving his social security bill at £689 in each of these hubs. Compare this to Paris, where he pays £29,472.

However, even with this unwanted bill, Paris only narrowly takes the first spot as most expensive tax bill for Brian.

London tax and the bigger picture

While this assessment should be taken with a small sachet of salt, our broad picture shows that London is not particularly attractive for UK citizens in tax terms. The business community argues that the reduction in the highest rate of income tax goes some way to helping retain our brightest people, but also questions whether it went far enough.

It’s worth nothing that in real life, salaries for the same role would vary across our five cities. Low tax would often lead to more expensive public services. And there will be the variance in the cost of living in general. Even if take-home salary was an individual’s priorities, these factors could well have a greater bearing on how disposable income an individual would be left with.

But income tax and social security contributions are still an important factor for Londoners looking for lucrative living options. There is an argument we shouldn’t undermine the threat other financial and business hubs pose to London’s native talent pool, nor the perceived damage uncompetitive tax regimes do to our competitiveness.

Perhaps it is this issue, rather than Pastygate, that would have benefitted from a heated national debate in the wake of March’s Budget.