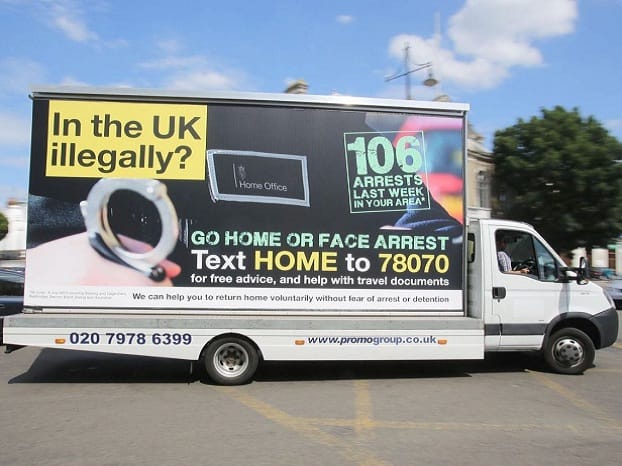 A Home Office advert telling illegal immigrants to “GO HOME OR FACE ARREST” has been banned by the advertising watchdog.

The Advertising Standards Authority (ASA) cleared the campaign of being “offensive and irresponsible” but said it was not “misleading”.

The advert was seen on vans that drove around the London boroughs of Barking and Dagenham, Redbridge, Barnet, Brent, Ealing and Hounslow.

The watchdog received 224 complaints about the adverts.

“The ad must not appear again in its current form,” said the ASA in a report.

“We told the Home Office to ensure that in future they held adequate substantiation for their advertising claims and that qualifications were presented clearly.

“We concluded that the poster was unlikely to incite or exacerbate racial hatred and tensions in multi-cultural communities.

“It was not irresponsible and did not contain anything which was likely to condone or encourage violence or anti-social behaviour.”

A Home Office spokesman said: “We are pleased the ASA has concluded that our pilot was neither offensive nor irresponsible.

“We have always been clear that this campaign was about encouraging illegal immigrants to leave the country voluntarily and was not targeted at particular racial or ethnic groups.

“In respect of the ASA’s other findings, we can confirm that the poster will not be used again in its current format.”

Over 250,000 Londoners left capital for other parts of the UK in a year