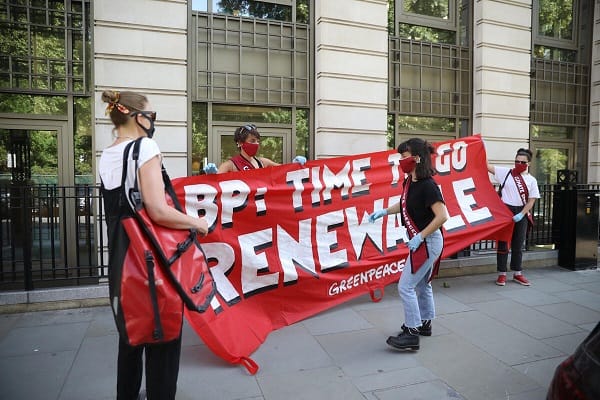 Greenpeace activists staged a socially distanced protest outside BP’s Annual General Meeting on Wednesday, which is being broadcast from the company’s London headquarters.

“Mr Looney says he is committed to ‘net-zero’ while also promising that BP will be in the oil and gas business for ‘a very long time’. He cannot have it both ways.

“The only way BP can address its climate impact is to stop drilling for new oil and gas and switch to renewables. Otherwise investors can expect more turmoil to come.”

Security guards outside the building confirmed that Mr Looney is at the headquarters for the broadcast. Police arrived on the scene and were happy for protesters to stay.

The Greenpeace protest comes after a cohort of green groups, including WWF, RSPB, and Global Witness sent an open letter to Mr Looney, stating that he owes shareholders answers.

The letter, which had eight signatories, set out five questions for Mr Looney:

BP’s AGM takes place during one of the most volatile periods in the oil industry’s history. Oil demand collapsed almost 30% in April,  and is projected to fall almost 20% in May, The knock on effect on prices has seen Brent Crude slump from around $65 / barrel in January to around $30 / barrel.

“Mr Looney recently told the FT: “It’s gotten more likely [oil will] be less in demand… Could it be peak oil? Possibly.”

BP’s bumper profits and a buyback bonanza for the FTSE...

BP shares tumbles after it offloads stake in Rosneft amid...