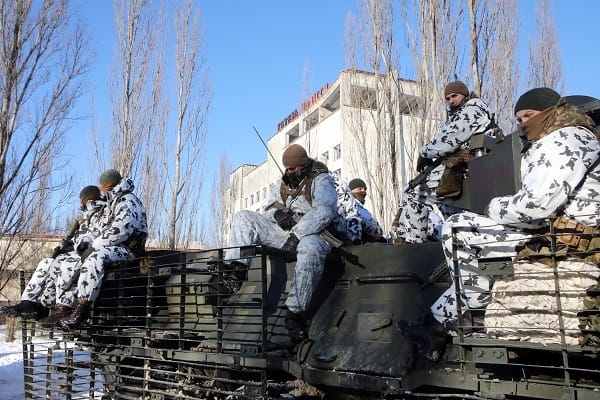 Europe issued with a nuclear disaster on Wednesday as Chernobyl is in blackout which will lead to the “release of radioactive substances.”

A nuclear warning was issued by Energoatom as the power line between Kyiv and Chernobyl has been disconnected and without any power the nuclear fuel will rise in temperature which could end up with radiation being emitted into the atmosphere.

Issuing a warning via Telegram, the Ukrainian nuclear company added, “The 750 kV Chernobyl-Kyiv high-voltage line is currently disconnected due to damage by the occupiers.

“Thus, the Chernobyl station and all nuclear facilities of the Exclusion Zone were left without electricity. About 20,000 spent fuel assemblies are stored at the spent nuclear fuel storage facility – 1.

“Which is possible only if there is electricity.

“If it is not there, the pumps will not cool.”

The Ukrainian’s national grid operator also confirmed that Chernobyl nuclear power plant’s power has been cut off amid the Russian invasion.

Energoatom added, “Because of the military actions of the Russian occupiers, the nuclear power plant in Chernobyl was fully disconnected from the power grid.

“The nuclear station has no power supply.

“The military actions are in progress, so there is no possibility to restore the lines.

“Slavutich city is also out of power supply.”

Energoatom gave a stark warning, if the pumps are not able to cool, then “the temperature in the holding pools will increase, soaring and release of radioactive substances into the environment will occur.

“The wind can transfer the radioactive cloud to other regions of Ukraine, Belarus, Russia and Europe.

“In addition, ventilation at the facility will not work.

“All personnel there will receive a dangerous dose of radiation.

“The fire extinguishing system also does not work, and this is a huge risk in the event of a fire that could occur due to a projectile.”