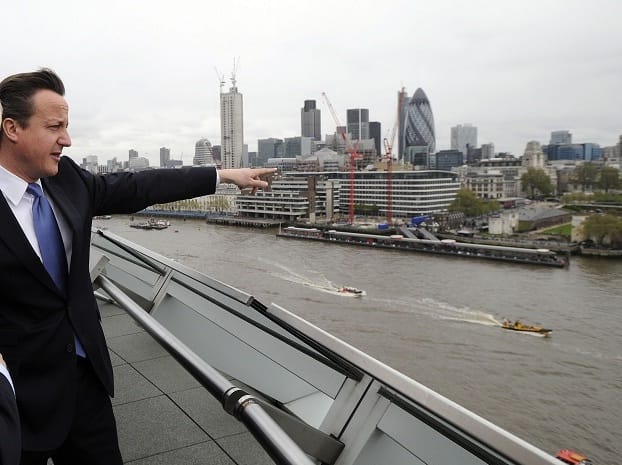 Dear Cameron, here are 7 energy & environment challenges you must address

From floods to fracking…

Michael Liebreich is the founder and chairman of the advisory board at Bloomberg New Energy Finance. He is also non-executive director at Transport for London and a visiting professor at Imperial College London Energy Futures Lab.

Within weeks after the General Election, David Cameron’s new Cabinet are rolling up their sleeves and getting to work on their in-boxes.

Now that the hated coalition with the LibDems has been consigned to history, some Tories may be hoping to see a lunge to the right. That would be a huge mistake: indeed to win again in 2020, the Conservative party needs to take advantage of Labour’s disarray and lunge for the centre. And the centre cares almost as much about international development and the environment as it cares about more traditional Tory concerns.

With that in mind, here are seven energy and environmental challenges for the new government:

During the last Parliament, David Cameron promised, over the heads of the LibDems, to go “all out for shale gas”. Now it is time to deliver. But first his team needs to slow down and do some explaining. People don’t understand that it’s not shale gas vs solar power, it’s shale gas vs Russian gas, or shale gas vs Qatari gas. Domestic shale gas is a far better environmental and geopolitical solution, but that has been lost in the rhetoric.

Second, the government needs to treat fracking like what it is in this country: an untested technique that needs to be properly regulated. Third, they need to let shale gas companies negotiate their own deals with local authorities. Let the boldest companies do deals with the bravest councils; if they can establish a track record for safety, then and only then can we go “all out for shale gas”.

In their election manifesto the Conservatives claimed that, if elected, they would “end any new public subsidy […] and change the law so that local people have the final say on [onshore] windfarm applications.” Cue much wailing by the ‘Green Blob’ and predictions of the death of the UK onshore wind sector.

But don’t forget, when the government slashed the solar subsidy back in 2011, it was the same people who predicted the death of the solar sector, only to see it blossom.

By 2020 new onshore wind ought to be competitive without subsidies, and if developers can’t figure out how to gain local acceptance for their projects, they don’t deserve to build them. A far bigger issue is how to get out of building Hinkley C, the nuclear power station on which we are supposed to spend £24.6bn.

Nuclear power will remain an essential part of the UK’s electricity mix, but at £92.50 per MW hour for 35 years, plus inflation, Hinkley C makes even offshore wind look cheap. Turmoil in the French nuclear industry should give the government the excuse it needs be to kill this poor deal and start again.

It seems such a long time since Ed Miliband secured his brief appearance on Top of the Polls by promising to freeze energy bills. Unluckily for him, falling gas prices took the issue off the table, and the rest is history (along with Mr Miliband). But the question of energy bills is not going to go away, with the average family’s doubling from £600 in 2006 to £1,300 in 2014, and more than one in ten households suffering energy poverty.

Despite dog-whistle claims about so-called ‘green crap’, there really is only one way to reduce energy bills in the long term, and that is to improve energy efficiency. The Conservatives promised in their manifesto to help one million home-owners to insulate their homes during the course of this Parliament; the target really should be many times that.

It can be done – I speak as the owner of a house with an A-grade Energy Performance Certificate – but it is a huge challenge. Start with a reboot of the Green Deal, call in the Green Investment Bank to help structure products, and bring in massive investment from private and institutional savers.

Folk wisdom says London had a smog problem many decades ago, but the 1956 Clean Air Act (pushed through by a Tory government) solved it. The truth is that we still have a huge problem: invisible particles, nitrogen dioxide and other pollutants together kill many tens of thousands of people each year in London and other UK cities.

Earlier this year the European Court of Justice and the UK Supreme Court instructed the UK government to deliver a credible plan by December or face huge fines. Improving the UK’s air quality will require accelerated scrappage of millions of cars, taxis and buses, and wholesale changes to our transport systems. Sadly, that means investment, and lots of it, public and private.

It also requires an answer to the dreaded Airport Question. Or not: the government could instead come up with an integrated, rail-based plan for medium-haul transport in the South East. Oh, and if any Eurosceptics think renegotiation or Brexit is the way to escape the EU’s strictures on air quality, consider this: the one area in which the Conservatives underperformed during the election was the UK’s cities, especially London, where air quality looks set to be a battleground issue in 2020.

Cue the eyeball-rolling, but yes, there are things in the energy sector we should be targeting in the renegotiation process. Three of them. First, Brussels needs to stop setting renewable energy targets and meddling in UK energy choices. Under the current treaties, the UK agreed that the EU would negotiate for us on carbon emissions. But when it comes to deciding whether to achieve our emissions goals via nuclear power, electric vehicles, carbon capture and storage or energy efficiency – or for that matter how powerful our vacuum cleaners should be – that should be up to our directly elected representatives.

Second, either fix the European Carbon Trading Scheme or dismantle it. As it stands it is a costly, bureaucratic, fraud-prone embarrassment, which doesn’t deliver a carbon price high enough to reduce the use of coal.

Third, complete the single market in energy and related services. The only way to achieve an affordable shift to clean energy is to allow free trade across Europe’s borders. It’s just like telecoms in the 1980s: we need new technologies, new players and new business models, not balkanised national markets and central planning.

The run-up to the election saw a rare display of non-partisan behaviour, with David Cameron, Ed Miliband and Nick Clegg signing a joint pledge to act on Climate Change. But now it’s back to the real world. December sees yet another in the endless series of international conferences to seal a global deal, this time at the uber-posh Elysee Palace in Paris.

As usual negotiations will drag into the small hours of the morning, as usual a piece of paper will be signed, as usual it will be hailed as a huge success by participants, and as usual it will make very little difference.

What the UK government needs to do is to continue working on concrete, practical initiatives, domestically and internationally, that accelerate the shift towards a cleaner energy system. While doing so, it needs to capture as many of the jobs and as much of the value for this country as possible. It also needs to keep working in a practical way to bring modern energy to the 2.6 billion people worldwide still cooking with dung, charcoal and firewood, and the 1.2 billion without electricity.

Tory election supremo Lynton Crosby should be eternally grateful that the floods which ravaged Britain last year did not return this winter. In 2013/14 it was just about possible to blame the last Labour G
overnment, or ineffectual Lord Smith at the Environment Agency. There will be no excuses next time round.

Protecting the country from floods is not about doing a bit more dredging and pumping, rushing water downstream to the next bottleneck as quickly as possible, it is about managing rainwater where it falls.

That means changing how farmers manage their land, and it means restoring flood-plains, rather than treating them as so much land to be concreted over. In London it means not placing a huge bet on the Thames Tideway Tunnel, but instead enforcing planning law on permeable surfaces and introducing life-enhancing blue-green infrastructure. It also means ensuring that the Thames Barrier and other major flood defences are up to the challenge of the next 50 years of rising sea-levels and increased rainfall.

So there you have it. Seven challenges, cutting across the work of multiple ministries – DECC, DEFRA, BIS and DCLG. Seven challenges which, if met, could help lay the groundwork for another memorable Conservative victory in 2020.

Michael Liebreich is the founder and chairman of the advisory board at Bloomberg New Energy Finance. He is also non-executive director at Transport for London and a visiting professor at Imperial College London Energy Futures Lab.

YO! Sushi millionaire Simon Woodroffe: “No more migrants until we get our sh** together”