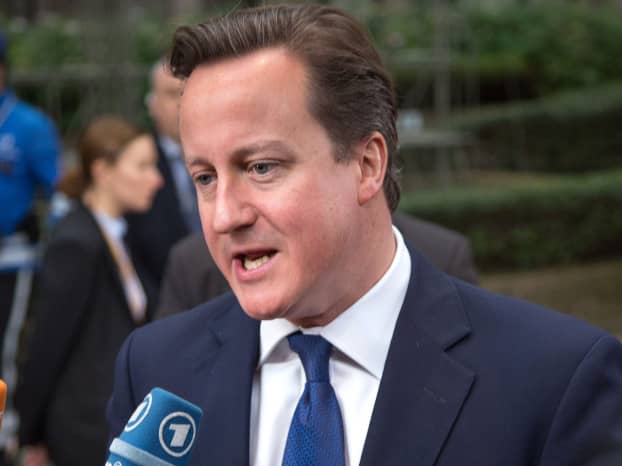 The PM calls for a ‘new EU settlement’

Prime Minister David Cameron has promised to campaign with all his “heart and soul” for Britain to stay in the European Union as he pledged an in/out referendum if the Conservatives win the next election.

Speaking in the City of London, Cameron said that the Conservative 2015 manifesto would call for a “relationship with a single market at its heart.” Once the government renegotates such an agreement, Britons would face a “very simple choice” of either to accept the result of the talks, or to leave the EU altogether.

Cameron said that if the UK decided to leave, it would be “a one-way ticket, not a return”.

High on Cameron’s list of priorities was resolving the Eurozone crisis, calling a new EU treaty to reshape the 27-state bloc and working to transfer powers back from Brussels to national governments.

“The next Conservative manifesto in 2015 will ask for a mandate from the British people for a conservative government to negotiate a new settlement with our European partners in the next Parliament,” Cameron said.

“It will be a relationship with the single market at its heart.

“And when we have negotiated that new settlement, we will give the British people a referendum with a very simple in or out choice. To stay in the EU on these new terms or come out altogether. It will be an in/out referendum.

“Legislation will be drafted before the next election. And if a Conservative Government is elected we will introduce the enabling legislation immediately and pass it by the end of that year.

“And we will complete this negotiation and hold this referendum within the first half of the next Parliament.

“It is time for the British people to have their say. It is time to settle this European question in British politics.”

Labour leader Ed Miliband slammed Cameron for being a “weak” Prime Minister driven by “party interest and not by the national economic interest”.

Shadow foreign secretary Douglas Alexander said, “We understand the need for change but I don’t honestly believe the best way to get change in a club of 27 is to stand at the exit door demanding change or threatening to leave.”

Speaking on the BBC’s Today programme, Chuka Umunna, Labour’s shadow business secretary said, “David Cameron is following his party but not in the national interest. This is going to create five years of uncertainty for our economy and business community…. Are they more or less likely to choose the UK? Global companies are more likely to shy away from the UK.”

UKIP leader Nigel Farage hailed Cameron’s move as a victory for his party.

“For the first time, a British Prime Minister is at least discussing the fact that leaving is an option,” he told BBC Radio 4.

“I remember many long, very lonely years in UKIP when, without a friend in the world, we were advocating this point of view.

“What today means is that in terms of the overall debate, the genie is out of the bottle and from now on the European debate will be taking place on terms that UKIP wants.”

David Cameron’s EU speech: what he would have said

“Cameron is an arrogant PR man, the UK will leave the EU and prosper!