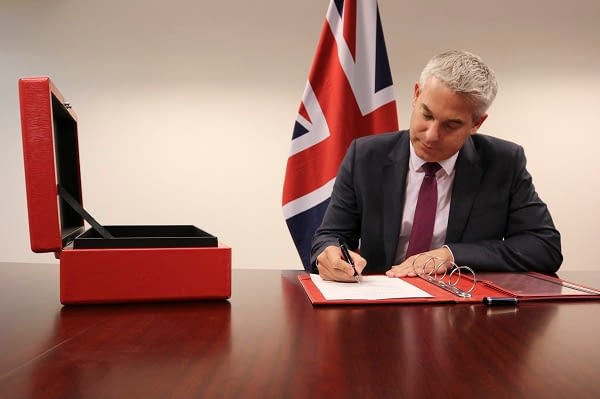 Stephen Barclay the Brexit secretary has formally signed the “commencement order” that formally starts the process of the UK preparing to leave the EU on 31 October, whatever happens next.

Signing the order is “totemic” of Boris Johnson’s “do or die” commitment which confirms the UK is to leave the EU.

Barclay said in a tweet, “I have signed the legislation setting in stone the repeal of the European Communities Act 1972.

“This is a landmark moment in taking back control of our law. It underlines that we are leaving the EU on October 31.”

The commencement order repeals that European Communities Act 1972 and the EU withdrawal agreement official comes into force, which was voted through the Commons last September.

Hard line Brexiteer Steve Baker told The Times, “It is absolutely totemic. It shows a transformation in the approach, that Boris Johnson is willing to leave on a fixed date with no question of extension.

“It’s the do-or-die pledge in black and white. It’s not merely symbolic.

“Once it’s signed that’s it, the UK is leaving. Theresa May did not bring the repeal of the European Communities Act on a fixed date because she was always willing to extend.”

The British prime minister will meet with French and German counter parts this week, Emmanuel Macron and Angel Merkel to discuss a new Brexit deal.

Johnson will make it quite clear to Merkel in Berlin of Wednesday and Macron in Paris on Thursday that the UK will leave the EU with or without a deal on 31 October.

Theresa May’s thrice defeated withdrawal deal in parliament must be replaced if the UK are to settle on a new deal.