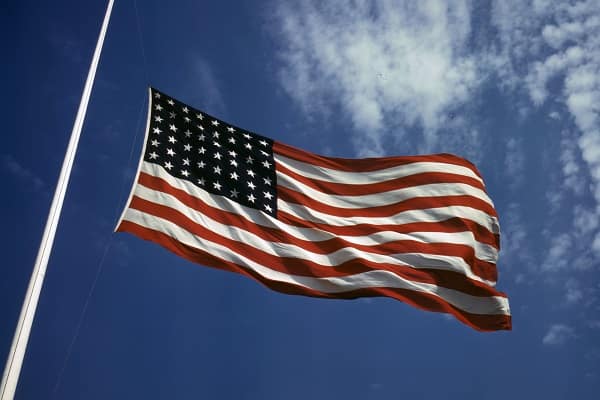 American flag apparel, is it legal?

The U.S. Flag is a popular part of our fashion, especially around holidays like Independence Day, Memorial Day, and Labor Day. Why do we wear the American flag, and is it legal?

The flag: A brief history

On the U.S. American flag, the stripes represent the original 13 colonies, while the stars are representative of the 50 states of the Union. The colors of the flag, red, white, and blue, are also symbolic of different things: red is symbolic of hardiness and valor, white is symbolic of purity and innocence, and blue is symbolic of perseverance, vigilance, and justice. Together, the flag is a symbol of freedom to all Americans.

The first versions of the U.S. flag were flown in the late 18th century, and it was mostly for military purposes. In total, there have been 27 versions of the American flag as the country expanded, and the version we currently use has existed for 50 years. The U.S. flag didn’t become a common item until after the Civil war. And in the 1950s, it became popular to wear the American flag, likely due to our country’s involvement in Korea and Vietnam, and now in the present day, it is a design that is regularly integrated into our clothing.

However, because of its rich history and symbolism, one may wonder if it is legal to wear U.S. flag apparel.

The confusion about whether one can wear the U.S. flag apparel comes from the flag code. The U.S. Flag code is Title 4 of the United States Code, Section 8. It presents the acceptable uses of the flag, display, storage, and retirement. There is also a section that discusses American flag apparel, and the legislation states that the flag should never be worn as apparel, drapery, or bedding, nor as part of a costume or uniform.

The U.S. flag code is not an actual law in place, merely a set of guidelines, and fortunately, breaking them will not land you jail time.

So what does this mean for clothes that have the American flag design? In regards to the U.S. Flag Code, the code discusses that it is not acceptable to wear the flag itself. It is perfectly fine to wear clothes with the design of the American flag, as long as the clothes aren’t made from an American flag.

Even then, this is still a guideline. In 1990, the U.S. Supreme Court struck down the Flag Protection Act of 1989. The act was initially put into place to stop protestors from burning the flag. In United States v. Eichman (1990), the U.S. Supreme Court declared the desecration of the American flag an act of free speech, which is protected by the First Amendment of the Constitution.

One way to show your patriotism to your country is to fly a flag, but it is also appropriate to wear the U.S flag designs. The clothes we wear can be deeply tied to our identity, mood, and values, so it makes sense that the U.S. flag has such representation in the fashion industry and our wardrobes. But if you truly want to honor the flag, be a good citizen.